I Dream Of Diesel 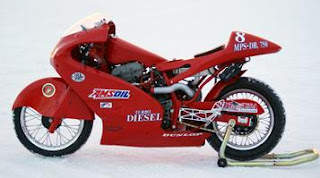 How does 105 mpg at 72 km/hr with a range of over 1000 km’s sound? Sounds impossible, right? Well, Hayes Diversified Technology (HDT), a US company that are the largest supplier of military motorcycles to the US Defense Department (according to information on their website) have a bike that will do just that, and it’s been tested too. HDT uses the very popular Kawasaki KLR 650 as a donor and beefs it up to military specifications. The most interesting modification though is a state-of-the-art non-turbo charged diesel engine. It’s not some Frankenstein backyard build up; these guys know diesel engines. Consider this as evidence; HDT Racing USA set new World and National Land Speed records for diesel powered motorcycles at the International speed trials by BUB in September 2007. 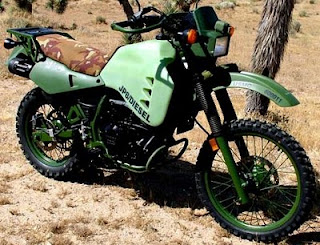 The real focus of this article is the KLR based diesel motorcycles though. For those unfamiliar with the KLR and the reasons why might have been chosen by the military and HDT as “the” bike to put a diesel engine into, consider these facts. The KLR has been in production for some 21 years and has proven itself to be a tough and reliable machine right out of the box. It’s a very versatile machine that can be used on-road or off-road and will be happy eating up the miles on either surface. It’s relatively cheap too. A 2008 KLR 650 from Kawasaki will only set you back $6,599 Cdn (MSRP). If the KLR were a shoe it’d most certainly be a cross trainer. That means it’s not the absolute best bike for carving up the twisty tarmac or navigating a narrow rutted path through the woods. What it does mean though is that you’re going to have a machine that can handle both of these comfortably.

Now, having not been privy to the actual reasons behind the selection of the KLR it still seems obvious that if you can only have one bike, this one can do it all. 2008 Kawasaki KLR 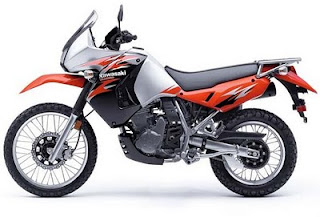 In 1984 all NATO military forces sought a long term goal of a “single battlefield fuel” to lesson the burden and logistical problems of supplying multiple fuel types. In 1997, in support of the “single battlefield fuel” goal, the US Navy announced that in the year 2005 they would not transport gasoline any longer; they would only supply “heavy fuels” such as diesel and jet fuel. After looking for suppliers of motorcycles that would suit their needs no motorcycle manufacturers took on the project. The US Marine Corps expanded their search, seeking all interested parties and offered to pay for the development of a diesel/jet fuel powered military motorcycle. Of the all the applicants, HDT was selected to continue development and testing to it’s final stages. HDT is now under contract with the Marine Corps to produce up to 522 JP8/Diesel Combat Motorcycles. 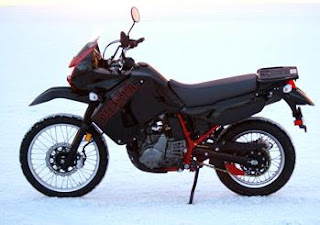 HDT has a few different models, the M1030M1 JP8/Diesel Military Motorcycle being the main bike of interest and the new “Bulldog”.

The M1030M1 JP8/Diesel Military Motorcycle has a 4-stroke, IDI single cylinder, liquid cooled 611cc engine. It produces 30 PS at 5700 RPM which, at 1 PS per 0.986 hp, is pretty darn close to 30 horsepower and 33 ft–lbs at 4200 RPM. The standard gasoline powered 2007 KLR has approximately 48hp and about 40.5 ft/lbs of torque. 18hp makes for a pretty sizeable difference even though the power comes on tap a little lower in the RPM range.

For 2008, Kawasaki made the biggest changes to the venerable KLR that they’ve made in, well, a very long time! For 2008 the KLR is slightly down in the hp department at right around 44 hp at 6500 RPM and 37 ft-lbs of torque at 5500 RPM. HDT have of course come up with a diesel powered version of the new KLR too. Now, I’ll say from the start that because of increased requirements of their military contracts HDT is not making these bikes available to the public currently but they do intend to offer them up for sale which when you read a little further I’ll think you’ll find is exciting news! The new HDT model is the MD670F “Bulldog” and it’s got a slightly bigger diesel engine than the military spec bike. Bumped up from 611cc to 667cc, the single cylinder diesel has got right around 35 hp at 5400 RPM but 43 ft-lbs of torque way down low at 3300 RPM. So you give up 9hp on the Kawasaki gasoline engine but you gain 6 ft-lbs of torque at 2200 RPM lower on the tachometer. Not to mention the phenomenal fuel economy means you’ll practically never have to stop to fuel up. The Bulldog gets a staggering 105 mpg at 72 km/hr with a range of over 1000 km’s. You’ll likely get less than this figure which is probably a little optimistic but even if it’s somewhere close this bike is still in a league of it’s own.

If you want to keep updated on the status of the MD670F “Bulldog”, HDT asks that you sign up for their newsletter which you can do here.

According to HDT here are the specifications for the MD670F “Bulldog”: 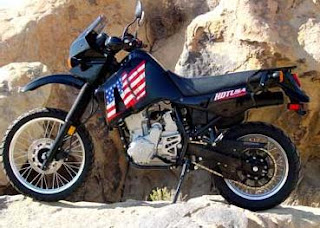 Now – the big questions… What will it cost and will it be available in Canada? Those are two unknowns at this time but don’t expect it to be cheap. It’s likely going to cost a lot more than a standard KLR. As for Canadian availability; they’ll certainly be available in the US at select dealerships or though HDT directly before they are here. So when the time comes that HDT starts selling to the public and you simply must have one it may mean that you have to import one. Or hopefully HDT will allow some dealerships to sell them. Maybe we'll even get a Canadian flag edition instead of this US flag version - Don't hold your breath!

When or if we hear any news from HDT on the BullFrog we'll let you know!