Book Review - One More Day Everywhere
Author: Glen Heggstad
Published By: ECW Press, November of 2009 (A Canadian company by the way - based in Toronto, Canada.)

420 pages, with many color photographs.


Finished reading Glen Heggstad's, One More Day Everywhere a few weeks back and have just gotten the time to do a review.  Having a two-month old around the house has really cut into free time! 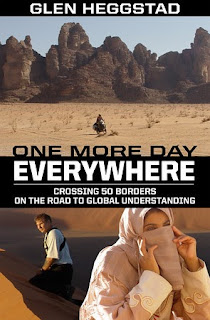 Most motorcyclists might better recognize Glen by his nickname, Striking Viking and his posts on the popular adventure rider motorcycle forum (www.advrider.com) . One More Day Everywhere is his second book.  The first of course was Two Wheels Through Terror - an edge of your seat account of his journey in South America and capture and torture by rebels. Read it!


One More Day Everywhere is his follow up work and takes place three years after the 2001 South American trip. Glen was searching for meaning and his adventurous spirit took him on the road on a motorcycle looking for it.

Starting in Japan, Glen worked his way through Siberia, Mongolia, Europe, the Middle East, South East Asia, and Africa, stopping in over 30 countries. Glen doesn't follow the easy route through these countries though. So if you're looking for an account of where to visit to see all the tourist sites and five-star hotels this book isn't what you're looking for.

Glen prefers to stay off the beaten path for the most part. In this adventure he battled extreme temperatures, knee-deep mud, bureaucratic roadblocks, health problems, and loneliness, but when the going got rough Glen always found that locals and fellow bikers were never too far away and willing to lend a helping hand to this stranger from California. Everybody seemingly knows at least one famous person from California - "Awwwnold Schwarzenegger."

Heggstad appears to have a positive outlook about most people and seems to try to find the positive in even the most negative or difficult situations. After reading this book there's no doubt that Glen encountered plenty of difficult situations. An experienced world traveler he tries to learn some of the language of the people he's visiting; which seems to go a long way in creating friendships and giving people the sense that he's an okay guy. That's never a bad thing when traveling in far away places.

Glen isn't shy about letting his views on the politics, religion, and culture of the areas he passes through known - at least in the book. You're going to know where he stands on a lot of things after reading this one.

Being a single man on this journey he also talks about some of the women he meets along the way. I wasn't really a big fan of his 1-10 ranking scale of many women he met - whether he had the possibility of some romance with them or not. It's not a big part of the book but it might bother some. I guess most people reading the book will be men and I know that some of the very popular posts he made on ADVRider were ones that he had posted of ladies he'd met during his trip so he was perhaps giving his audience what he thought they wanted.

One thing I didn't expect after reading the book is that all royalties from Glenn's projects are donated to international aid organizations. Impressive!

Having read a good many adventure motorcycling books I can say that this was an enjoyable and easy read. Glen's writing is clear and easy to follow (something that can't be said for all motorcycle adventurers turned authors). Glen is skilled at building suspense and offers vivid descriptions that help you feel like you're a part of the ride. You may not necessarily agree with all his politics but if you're interested in round the world adventure by motorcycle books this is surely one you should have on your bookshelf.


Canadian based readers - buy it here: