Geoff Smith is a motorcycle enthusiast hailing from St. John's, Newfoundland. With 30 years of motorcycle experience he's ridden most of the roads in Newfoundland and a lot of the off-road trails as well. And, in a stroke of luck for us, he always brings a camera too!

My earliest and fondest memories of time spent on a motorcycle of my own go way back to 1978. My first bike was a used mid-seventies model Honda CT125, with knobby tires and ridiculously wide motocross handlebars. My first jumps, crashes, and experiences getting stuck all happened on that great little trail bike. It was a very easy bike to ride, remarkably reliable, and just downright fun whenever or wherever you rode it.

I’ve owned many off road bikes since selling my faithful old Honda CT125. I’ve had two motocross bikes; a Honda CR250 and a Yamaha YZ125; a pair of Yamaha IT enduro-class racers in both 175 and 200 cc versions; a Honda XR200 play-bike; a Honda XL250 dual-sport; and a Yamaha DT400 dual-sport bike. Those bikes all had their strengths and weaknesses, but only my 2004 Suzuki DRZ400S has come close to giving me the same kind of pure joy that I felt while riding my very first trail bike. 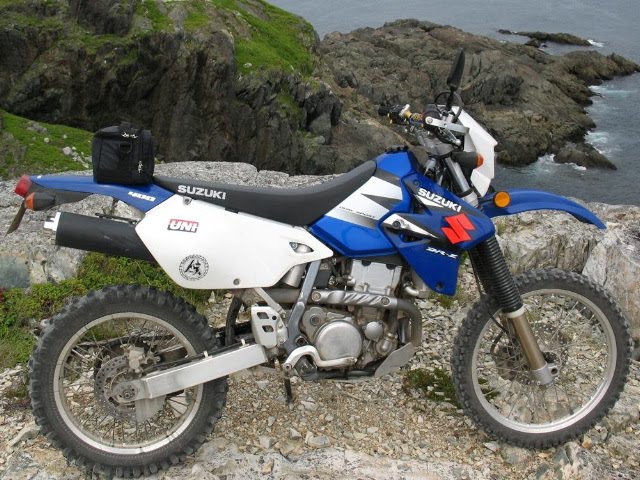 DRZ 400S with knobby tires and off road armor

The Suzuki DRZ400 has been around since the year 2000, and despite being a little long in the tooth nearly a decade later, it’s still one of the best options available if you want a bike that can be ridden as a commuter, handle serious off road trails, and single-track woods riding.

It’s a bike that bridges the gap between bikes like the popular and potent off road only Yamaha WR450, and the venerable KLR650 dual-sport beast of burden from Kawasaki.

The DRZ400 comes in three versions, these days. There is the original off road only ‘E’ model, the dual-sport ‘S’ model, and the more street-friendly ‘SM’ model.  SM being the Super-Moto version. 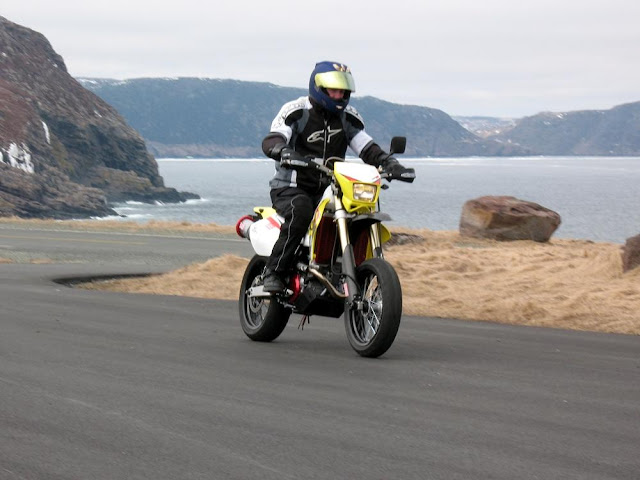 The primary differences the ‘SM’ model has over the E and S versions are smaller sport-bike-like wheels and tires (17” front and rear as opposed to a 21” front and 18” rear on the E and S models), inverted forks, and a tapered swingarm.

The present ‘E’ and ‘S’ model are virtually identical, with the exception of the ‘S’ model’s street-legal lights and other DOT running gear that one expects to find on a typical dual-sport motorcycle.

In past years, the ‘E’ model was equipped with an FCR flat-side carburetor but now shares the same Mikuni carburetor found on the other versions of the bike. The ‘E’ model retains its slightly more aggressive cams, higher compression ratio, and slightly softer rear spring. 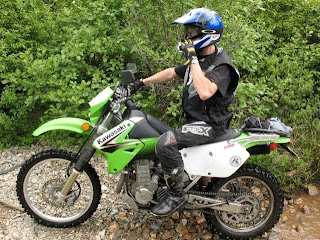 Kawasaki KLX400R
aka "The Green DRZ

"Mid-way through the DRZ400 production run, Suzuki and Kawasaki entered into a marketing agreement whereby Suzuki would manufacture and supply Kawasaki with both an off road and a dual-sport version of the bike. It was to be sold with green body parts, under the Kawasaki badge, and with the model designations KLX400R and KLX400SR. The agreement between the two companies only lasted a few years. To this day though, many examples of what are affectionately known as the ‘The Green DRZs’, can be found on the road, on the trails, and on the used bike market.

The DRZ400 engine was also used in Suzuki’s high-performance four wheel ‘LTZ” all terrain vehicle. The long running production, general popularity of the bike, and the marketing agreement between Suzuki and Kawasaki means there is excellent parts availability and very good after-market support for the bike in all its forms.

ON THE TRAIL WITH THE DRZ400

The DRZ400S comes equipped with tires designed primarily for street use and final drive sprocket ratios to match (15/44 front/rear). This street oriented setup makes the bike a capable commuter that doesn’t mind the occasional stretch of highway. It is possible to take longer and more frequent rides on the highway but only if you can put up with the firm, narrow dirt-bike style saddle and lack of wind protection.

For true technical off road use, DOT knobby tires and a 14/47 sprocket-set are the way to go. This tightens up the feel of the gear ratios, and allows the bike to be ridden slowly over very technical terrain, without the rider having to repeatedly slip the clutch. Engine case guards (to protect the soft magnesium alloy engine side cases) and an engine skid-plate (to protect the bottom of the engine and the vulnerable water pump) are wise investments for those wanting to tread a little further off the paved routes. 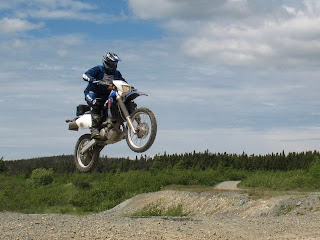 Photo by: Mike Buehler
The Author, Geoff Smith
Catching a little air on his DRZ400S

The ability to adjust the suspension is one of the best features of the DRZ400. The dual-sport ‘S’ version shares the same suspension as the off road-only ‘E’ model. This setup gives you compression and rebound dampening adjustability up front. In the rear, there are adjustments for spring preload, high and low speed compression dampening, and rebound dampening. This wide range of adjustability allows you to tailor the bike to suit whatever conditions you’ll face.

With a claimed dry weight of 291 pounds, the DRZ400S is considerably heavier than a Yamaha WR450F at 247.5 lb, but it’s also much lighter than a typical 650 cc dual-sport bike (The 2008 Kawasaki KLR 650 is 386 lbs for example). Once the suspension is properly dialed-in on the DRZ and the bike is rolling along with 14/47 sprockets, it feels much lighter than the claimed dry weight would suggest. The bike tracks very well when the going gets really rough and loose with the help of a suspension on the slightly plush side for an off road bike. The DRZ’s forgiving suspension allows for “all day” trail riding comfort – you can stand on the pegs and ride a very long way before tiring. 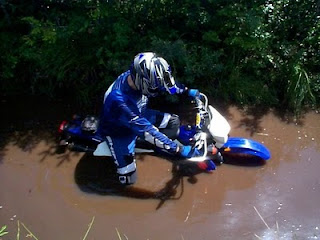 Photo by: Lorenzo Moore
The Author, Geoff Smith
Misjudging the depth of a 'puddle'.

The power from the liquid cooled 398 cc single engine is more than adequate, with lots of low end and midrange grunt. Suzuki claims 38 hp for the ‘S’ and ‘SM’ models, and 40 hp for the ‘E’ model. The brakes are very good, and the bike feels army tank solid beneath you. Reliability of the bike has also been a gold-standard, over the years.

The DRZ is by no means a motocross bike, but you can toss it up and catch a little bit of ‘air’, if you so desire. The bike also seems very happy to cross deep stretches of water, without so much as flinching. I once found myself in water that was nearly up to the seat. After I drained the carburetor, the bike happily carried me for an afternoon’s worth of continued trail riding, without issue.

The 10.0 litre tank gives you a range about 160 km’s, or roughly 100 miles, of mixed street and trail riding before hitting reserve. This is more than adequate for most people, but if you plan on riding many long distance trips, a larger fuel tank may be a useful addition. The stock seat is also quite firm and narrow for long rides on paved roads, as mentioned earlier. Luckily, the aftermarket has seen fit to fill this need and many after-market fuel tanks and seats are available. The bike lacks a sixth gear too, so the engine may tend to rev higher than many riders would like at highway speeds. Although this aspect is of no real concern from a mechanical perspective, since the DRZ engine is very happy when the revs are high, and it will buzz along all day without complaint.

FOR THE TECHNICAL FOLKS:

Stock sprocket set ups for the DRZ’s and the Green DRZ’s: 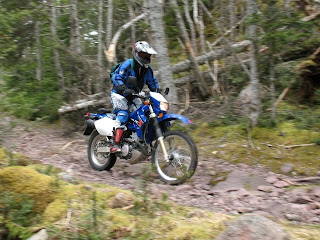 I am fortunate to live in the province of Newfoundland & Labrador, where there are literally tens of thousands of kilometers of both single track and ATV trails. This has made the DRZ400 a very popular bike on the trails where I live. The bike is well-suited to connecting trail networks via the many coastal highways which run through the rural areas of my home province.

In the early spring of 2005 I found a good deal on a left-over 2004 model DRZ400S. Soon after riding away from that local dealership I installed DOT knobby tires, off road armor, and a set of hand guards. A set of high rise motocross handlebars would follow those modifications, along with some other minor after-market bits and pieces.

My riding buddies and I have explored many of the Island of Newfoundlands’ most interesting coastal trail networks, particularly within Eastern Newfoundland, from Cape Bonavista, to Old Perlican, to Cape Race. The trails in our region are typically a challenging mix of very rocky and very wet terrain. This is the type of trail riding where the DRZ400 really shines.

There are few bikes on the market which have carved out such a distinctive niche, as the Suzuki DRZ400 has. Many of us who own the bike hope to see an updated version of the venerable model in the near future, maybe even a 450 cc version! But until then, the 400 cc version will continue to serve us well as an old faithful street and trail mount.

For me, it will continue to be the only bike that never fails to produce the mile-wide grin I typically had on my face while riding my little red 125 cc Honda trail bike some three decades ago.