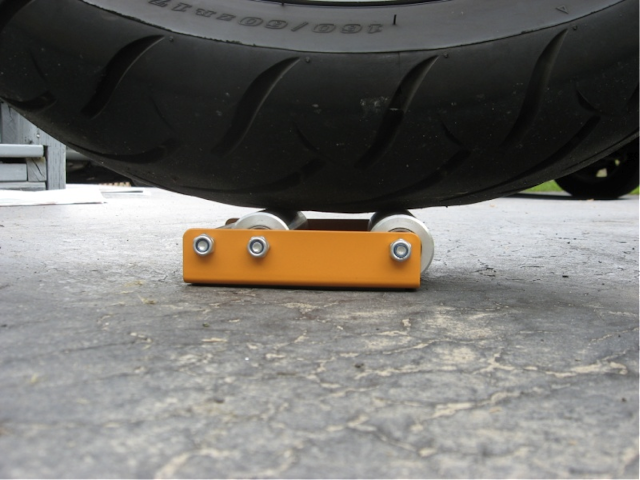 The WheelJockey is a product created by Bill Kniegge of BlueStrada Tours. Blue Strada Tours is a motorcycle touring company based out of North Carolina and they use a fleet of Suzuki VStrom's.  One thing about the VStrom though; they don't come standard with a center stand. So - Bill had a bunch of bikes that needed regular chain maintenance and thus the WheelJockey was born!

We've had this product on the shelf waiting to be reviewed for a while but it was handed off to the owner of a Suzuki SV650 which seemed rather fitting!  This review was written after the authors first use of the WheelJockey.  The instructions do indicate that it'll take a little practice to get good at figuring out the proper amount of force to use to get your bike up onto the WheelJockey.

It ships in a tiny little box and appears to be very sturdy and well made.  It's so small that you can probably keep it under your seat so that you'll have it wherever you might need it.

Once the bike was up on the WheelJockey, the main function of the device was put into use. The instructions say to rotate the wheel using the spokes and not to push or pull on the tire itself. However, this rule is somewhat difficult to adhere to when the spokes are not in the best position to grab and rotate. It made sense that the reason behind not pushing or pulling the wheel was because the bike may come off the WheelJockey.

It was discovered that if you are careful, and use two hands positioned opposite each other on the wheel (ie: like you are at “9” and “3” on a steering wheel), you can effectively and safely rotate the wheel without putting excessive lateral forces on the whole bike enough to make it come off the WheelJockey.

The chain was cleaned and waxed while on the WheelJockey which proved to be a good tool to get this kind of maintenance work done. Once completed, the bike was stood up and walked forward off the WheelJockey.


Overall, the WheelJockey was found to be a very good assistant for bike maintenance with a side-standing bike when an actual rear bike stand is unavailable.
MORE INFORMATION:

- Retail price: $59.00 USD
- For more information on WheelJockey or to order one for yourself check out their website at http://wheeljockey.com/

Thanks go out to Bill at WheelJockey for providing a sample.