A couple weeks back I visited Lutz at Kottwitz Werke, his Ural dealership here in Halifax, Nova Scotia. Lutz had just gotten the new limited edition Sahara Gear-Up in from Russia. Lutz invited me up to watch the un-crating and prepping of the bike.
I jumped at the chance and took a few pictures of the very shiny and clean 2wd Gear-Up with Sahara colors. It's not often you'll see shots like these. She's not even put together yet!
By the way - if you want a Sahara you'd better get yourself to a Ural dealership soon because these are limited edition's. The Canadian price should be right around $15,345 according the the Distributor. Though you might want to spring for the windscreen as an option too. I'm not sure how much that is. But ask your local dealer and they should be able to tell you. 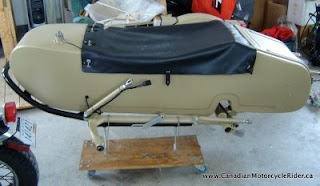 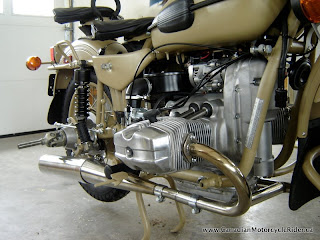 749 cc's of OHV air-cooled, four stroke, flat twin cylinder power! It makes 40 horsepower at 5,600 RPM. If you're looking for high-speed and sportbike performance this isn't the bike for you. That's not what this bike is about. This is one bike that you need not be too scared about performing some of the basic maintenance on your own - if you're so inclined. It's about as simple as things get in terms of motorcycle maintenance. 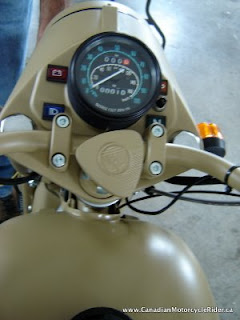 Sorry, this one is a little blurry but I wanted to include it anyway because you can see the simplicity of the gauges. A big speedometer and a few warning lights. It's all you need! And the triangular knob in the center - that's your steering damper... old school style.  Tighten it up for stiffer turning, loosen it off for less. 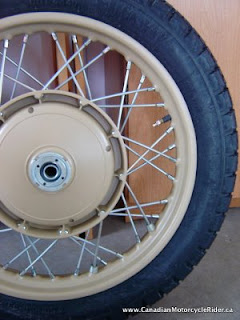 This is the spare wheel that is mounted on the sidecar. Those spokes are stout! Having a sidecar puts a lot of extra forces on the wheels so having beefy spokes that might be a little overbuilt adds to the durability. You get a drum brake on the sidecar wheel (and the rear wheel of the bike) as you can see in the picture. The metal valve caps with core removal tool are standard too. One less farkle. 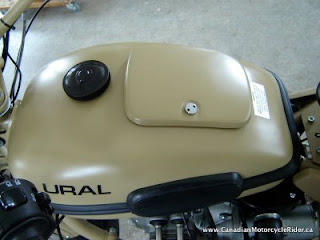 Here's the tank of the Sahara. You've got the black leg guards on both sides of the tank. There's a small compartment on the top of the tank as well. The circular silver knob on the left is how you open it. Along with a set of keys to start the Ural you get a special set of two pronged keys that mate up with that silver circular knob to access the storage area on the tank. It's not really deep but a handy spot for carrying some small essentials. Maps, cell phones, etc. 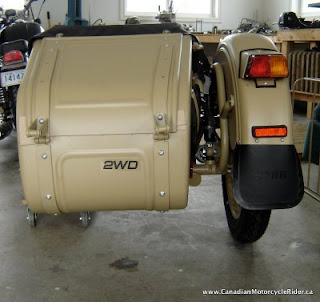 Here's another shot of the sidecar, this time from the rear. This is before the spare tire and luggage rack is mounted on.  This bike has a trunk! You've got over 3 cu.ft. of storage in the trunk.  That's not including whatever you can put in the sidecar itself. 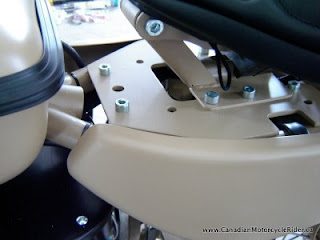 One of the newer features on the 09 Sahara Gear-Up is this bolt down plate under the seat. It used to be welded in. The battery is mounted under here so the bolt down plate eases access to the battery.  You can also see a black string here too, that's the tie up for the seat cover. This model has two rubber tractor style seats. It comes with seat covers that make the seats look a little nicer and add some cushioning. 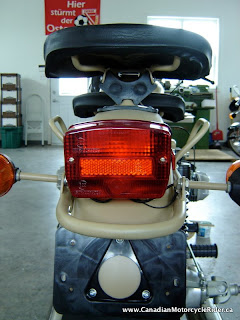 A rear shot of the  bike. You can clearly see the drive spline coming out of the rear rub in this one.  You might also see that the inside signal is facing forward.  It just fits in the crate a little better like that I guess. 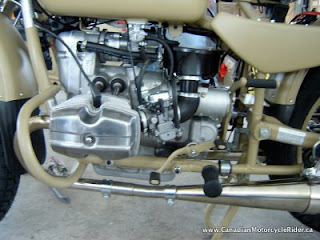 Another engine shot, this time from the left side. The gear selector had two sides so you can tap the front to gear down and hit the rear for gearing up.  You've got 4 forward gears and one reverse gear - shaft driven - on the Gear-Up.  Just above the rear part of the gear selector you can see another lever facing toward the rear of the bike.  That's the kick start!  It does have electric start too. 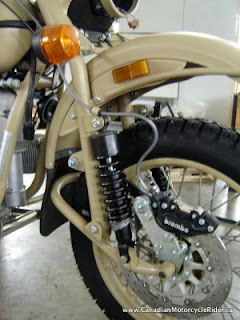 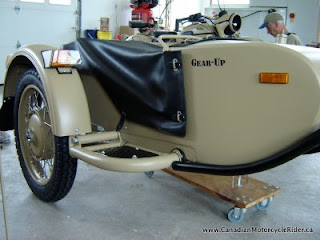 Sidecar photo from the right. You can see the sidecar step here and more of the sidecar bumper (in black). 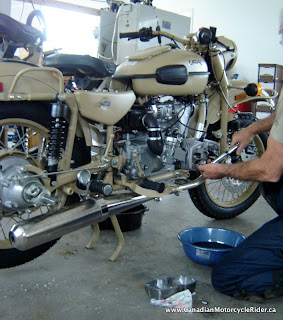 Fine tuning the valves. Check out those nice stainless pipes. 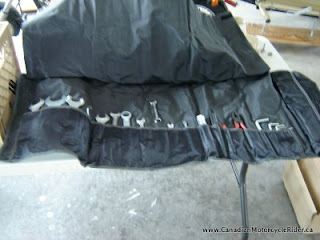 You know those little tool kits you get with motorcycles that go under the seat? Well, Ural takes the whole toolkit thing a little further than most manufacturers. You get a pretty substantial set of tools with the Sahara Gear-Up. It has some velcro closures and rolls up nicely.

Couldn't resist taking this shot. It's the Ural Motorcycles symbol. This piece is used to secure the spare wheel on the top of the sidecar.
And that's it for our photo's - I hope you enjoyed them nearly as much as we enjoyed checking out this very cool motorcycle.
- For more information Ural I'd recommend checking out the Ural website or the Canadian Distributor's website.
- For more information and news about Ural's check out Canadian Motorcycle Rider's "Ural" category.
Special thanks to Lutz and his prep guy Rob for having me in the shop and answering all my questions. If you want a Ural you can visit him at Kottwitz Werke.

Ural is a Russian motorcycle company that began out of necessity when in 1939 the Russian Army decided that they needed a versatile, go-anywhere vehicle to help in the fight against encroaching German forces. The story goes that in 1939 the USSR was doing some pre-World War II planning and looking for a motorcycle that would suit the red army requirements. It was determined that the BMW R71 was a good fit so five of them were covertly purchased and reverse engineered. Two years after that initial purchase the first prototypes were ready and shown to Stalin. Stalin approved it and in 1941 production began and IMZ-Ural was born. Approximately 10,000 motorcycles (which, at the time, were called Russian M-72 sidecar motorcycles) were produced and used in WWII.

Originally the motorcycles were produced in Moscow and the factory was busy but the Nazi Blitzkrieg warfare technique was so effective that Soviet strategists thought that the Moscow factory was too vulnerable a target to bombers. So the plant was moved further east to the Ural Mountain region in a small trading town called Irbit in Siberia. Ural motorcycles are still produced there today.

Enough History – Tell Me About the Bikes Already!

The majority of the bikes built by Ural are a heavy duty sidecar motorcycle. Like BMW, the engines used in the Ural machines are a balanced flat twin design. Air cooled; they have a four speed gearbox with reverse gear, shaft drive, two disc dry clutch, spring shock absorbers, and drum brakes. New solo models and alternative sidecar models have been designed to broaden Ural’s appeal in the Western market. They’re gaining some popularity and even got a mention in the David Cronenburg (born in Toronto) directed motion picture “Eastern Promises”. The character played by Naiomi Watts drives a classic Ural motorcycle in the movie and the character that Viggo Mortenson plays is from the Ural area.

There are five models in the Ural line-up and all but one have a sidecar. The model without the sidecar is a called a “Wolf” and has a 750 cc engine. The real appeal of Ural is their sidecar machines so we’ll take a more in-depth look at those models. The extra special feature that two of four sidecar models have is that they have on-demand sidecar drive (2 wheel drive! – Ural claims that they’re the only sidecar motorcycle in the world that offers on-demand 2wd sidecar motorcycles) that with the flip of a lever you can switch from single-wheel drive to two wheel drive. The 2wd mode locks in power to the sidecar wheel with no differential so 2 wd mode is best left to slippery terrain or else steering becomes quite a challenge.

The sidecar models are named: Tourist, Retro, Gear Up, and Patrol. They also offer a Tourist LX with upgraded sidecar. They all have a 745 cc engine that’s rated at 40 hp at 5600 rpm. They’re not meant to get you anywhere with extreme speed. The estimated top speed of the two non-2wd versions is 105 km/hr and the 2wd versions are 95 /km/hr. I’ve read of riders pushing them a little faster than these claimed speeds. Top speed isn’t really what these bikes are all about though. Ural says they get between 26 and 33 miles per gallon and they drink the good stuff, 91 octane. They have electric starts but also, and how’s this for retro, kick-starts. Urals are capable of getting you into some extreme locations or through some extreme conditions and do it in style. Lots of people drive the 2wd versions in the winter even! Yes that’s right…. Winter. Ural drivers are a hardy bunch! They’re a great machine for getting to the cottage or remote hunting location. The sidecar can be used to carry all your gear. The Gear-Up model is even available with a camouflage paint job.

Driving a Ural is a bit of a different experience than riding a regular motorcycle; no more putting your foot down at lights! Decidedly car-like in some respects, you don’t lean this bike into corners; you need to use the handlebars to muscle it around. Left hand corners can produce some understeer while right-handers can take a little getting used to as well because centrifugal force can easily pull the sidecar up in the air. Leaning or having some weight in the sidecar helps reduce this to a degree. These bikes certainly have some character! If you get one you’d better give yourself some extra time to arrive at your destination; particularly if you stop anywhere. They attract quite a bit of attention on the road.

Give me the Facts:

The Tourist, and Retro don’t offer the 2wd option and Ural refers to these models as “family recreation motorcycles”. They are classic looking machines with all the versatility that a sidecar offers. The Gear-Up and Patrol are labeled as “Sport Utility Motorcycles with 2wd”. Prices on some dealer websites in Canada list the following prices: Tourist - $11,395, Tourist LX $11,995, Retro – $13,495, Patrol - $12,875, Patrol LX $13,395, Gear-Up - $13,595. You may be able to special order a Wolf in some locations; expect to pay roughly $10,450. The LX versions add two-tone paint, rolled and pleated high back seat and velour interior in the sidecar. Check your local dealers for more accurate pricing information though as prices may vary slightly. Add tax, licensing, registration and other assorted fees to these base MSRP’s.

The family recreation motorcycles have a tank capacity of 22 liters, telescopic front suspension and all three wheels are chrome steel spoke, cast aluminum hubbed 18’s. Dry weight for the Retro is 717 lbs while the Tourist, Patrol, and Gear-up are 739 lbs dry. The sport utility motorcycle’s get 19 liter tanks, leading link front suspension, hydraulic spring shock absorbers in the rear, and all three wheels are the same chrome steel spoke, cast aluminum hubbed style but they’re 19’s. All the sidecar models feature Brembo disk brakes in the front and mechanical drums on the two back wheels. You get a 2yr, unlimited mileage warranty.

If you want to be the center of attention and own something unique I’d suggest taking a close look at Ural!

Here’s a couple of additional links that you may be interested in:

- Link to movie clips on the Ural website.
- For a list of Canadian Ural Dealers check out this link.