Story and photos by Dustin A. Woods

Over the course of my time with the 2011 Softail Convertible CVO, I was approached many times by curious onlookers that would admire the bike and inquire as to what model it was. After responding, I was inevitably asked, “Isn’t every motorcycle a convertible?” To be fair, it’s a valid question. After all, how many motorcycles have you ever seen with a roof? In this case, the term convertible refers to the fact that this Softail CVO can easily be transformed from a custom tourer to a custom cruiser in mere minutes. For those who may be on the fence over which kind of model to purchase next and aren’t a fan of compromise, this split personality Softail was introduced in 2010 to be the best of both worlds. 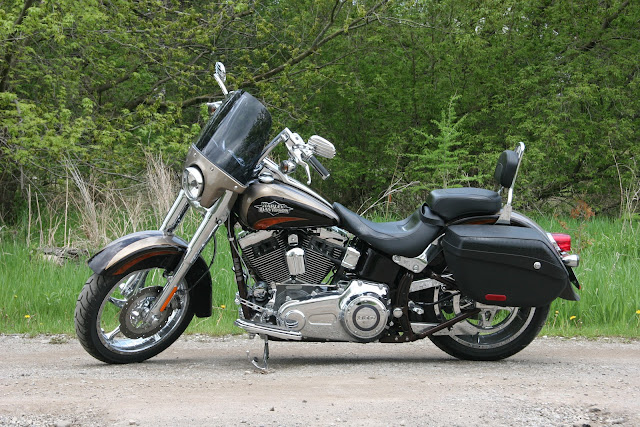 The Convertible CVO has a unique fairing that can be attached or detached in two shakes of a lambs tail. Remove the side saddlebags and back rest and presto chango, you're ready to go cruising. Heading out on a long trip? Simply reattach the two pins that keep the fairing in place, click the saddlebags back on and hit the open road. Cruise control is also standard, which most owners will never bother with but can be a Godsend on a long journey. One of the benefits of Harley baggers is the fact that they include a kick-ass sound system that allows you to enjoy your favourite tunes if for some unknown reason you happen to grow weary of the V-Twin symphony booming from between your thighs. Being a removable unit, it would be too complicated to outfit the Convertible with a permanent stereo, but it does house a simpler two speaker system with 20 watts per channel along with an auxiliary input and pocket for an MP3 player. Volume can be adjusted by hitting the + and – buttons on the inside of the front fairing but if you want to change songs on your Harley iPod, it requires pulling over and shuffling through playlists on the MP3 player so you better make sure you choose your riding music carefully. You’ve been warned.

CVO, for those who may be unfamiliar, stands for Custom Vehicle Operations, a limited production program that adds acres of chrome, accessories that are unavailable on the standard lineup of bikes and flashy paint schemes like that of the Roman Gold  with Burnished Copper Graphics of my tester. This also included the Convertible’s leather seat, complete with alligator inserts. Sinking into this handsome saddle is an easy proposition for those who may be inseam impaired as it sits at a lowly 665mm (26.2-inches) – even shorter than the Fat Boy Lo.

Thumb the starter button and the twin cam Screamin’ Eagle V-Twin coughs and sputters before roaring to life and settling into that familiar idle with which Harley has become synonymous. Keyless ignition means never having to fumble for the keys. Leave the fob in your pocket and forget about it. Harley is also famous for torque, and the 110 cubic inch powerplant churns out 110 ft-lbs at 3,000 rpm. Certainly nothing to scoff at, however its running weight tips the scales at a portly 354.3kg (781 lbs) so don’t expect to pass too many gas stations on a long journey if your hand is enthusiastic on the throttle.

While the removable fairing isn’t nearly as heavy and cumbersome as that of a Street Glide, it does add weight to the front end and also does more to disrupt oncoming air rather than make friends with it once reaching highway speeds. The ape hanger handlebars are more comfortable than they look and definitely add to the custom look but aren’t ideal for carving corners, nor are the floorboards that I scuffed after about 10 minutes on the bike.

Thanks to the booming air-cooled, fuel-injected 45-degree V-Twin and six-speed transmission, the Convertible CVO is a blast to ride but definitely isn’t purpose-built for speed. But then again, that isn’t really the point, is it? Like most Hogs, it feels most at home when cruising boulevards or smooth two-lane blacktop. Visually similar to the "hardtail" choppers of years gone by, this Softail features a hidden shock under the chassis to soften the frost heaves and potholes of our sadly neglected roadways. Reeling in that power wasn’t a revelation but braking was actually better than expected, thanks to the four piston calipers grabbing up front, two piston calipers in the rear and ABS as standard equipment. Another set of discs could be added but it would be a shame to overshadow the 18-inch chrome StingerTM custom cast aluminum wheels.

Tipping the register at $32,739, the Convertible CVO certainly isn’t cheap but those who were previously considering the possibility of adding another steed to their stable can take solace in the fact that is it essentially two motorcycles in one.

-
Prepare to scuff the floorboards
Not exactly a fuel miser