Closer than expected, beyond your expectations
Story and photos by Dustin A. Woods

There is no more relaxing way to spend a vacation than taking a trip on motorcycle. Free from the distraction of e-mail, phone calls and various handheld devices that monopolize our time and attention, being at one with the open road allows time for reflection and refuge from the daily grind. How often do you see motorcycles parked outside of a therapist’s office? Exactly. Whether your first excursion of the season, or possibly ever, there are certain essentials that one should aim to achieve. The ideal first roadtrip shouldn’t be too ambitious but should still involve travelling a decent enough distance to get outside of your area code and comfort zone – the weekly ride to Starbucks doesn’t count. 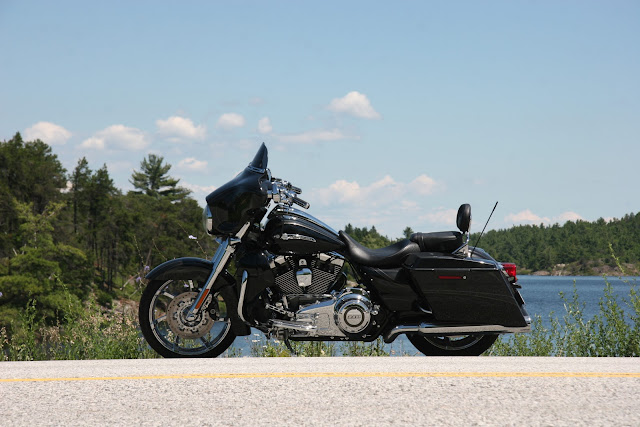 Regardless of whether I camp or stay in a hotel, I always have a general idea of where I’ll be sleeping but leave plenty of flexibility for spontaneity and misadventure. I find doing a little research beforehand goes a long way to allowing you to learn about where to go and what to do. Unlike driving a car, you will be exposed to fatigue and the elements, so plan your itinerary and attire accordingly. Hope for the best but plan for the worst; that includes packing both raingear and sunscreen, a GPS or even a good old fashioned map, first-aid and tool kits. Better safe than sorry.

For my first trip of the season, I had a free weekend at my disposal, a 2012 Harley-Davidson Street Glide CVO and a full tank of gas. How much can you explore in between quitting time on Friday afternoon and role cal Monday morning? You’d be surprised. I did some sniffing around and found that Georgian Bay offers a surprisingly diverse selection of scenery and options for places to play and stay. It is a perfect distance because it is off the beaten path but won’t take long to get there and back. There is also plenty to keep you busy if you have more time to spend.

Being the summer solstice, I decided to take advantage of the longest day of the year by scoping out as many beaches as I could over the course of the weekend and had seen several interesting lighthouses and waterfalls I’d been told were worth a look. My goal for the first night was getting out of Toronto and ensuring I wasn’t under too much pressure to log serious miles the next day. I figured Parry Sound would be as good a spot as any and would be a big enough city to access fuel for both the bike and myself if I got there later than expected. I had stayed at the Bayside Inn several years ago when it first opened and not quite ready for prime time but it has improved by leaps and bounds to become a true diamond in the rough. After a long day of work and a few solid hours on the bike, a hot shower and one of the most comfortable beds I’ve slept on in recent memory were a Godsend. Being June, sunset didn’t occur until late in the evening so I had enough time to ride to Waubuno Beach to enjoy its colourful splendour.

The next morning I set off to check out Killbear Beach before heading North on Highway 69 to Sudbury. You wouldn’t think of such a city to top the list of beach destinations but both Bell Parks Beach and Moonlight Beach were well worth the trip. After enjoying a cold drink and some lunch, I headed west on Highway 17 then south on Highway 6 to Espanola, passing through the quaint little town of Little Current. A small town with a big heart, the main street was bustling with people out shopping, having patio drinks and even buskers entertaining passersby – something you would associate with the big city. Continuing south, the landscape abruptly changed as the smooth asphalt snaked through giant rock faces and pristine lakes one would associate with British Colombia. The scenery changed once again as I reached Providence Bay which seemed more reminiscent of the Hamptons than Ontario. Walking back to the bike after snapping pictures on the beach, a mother was trying to pull her son, who must have been five or six, away from staring at the gleaming Harley. I asked if he wanted to help me start the engine and his eyes grew as big as pie plates as he nodded enthusiastically. Asking his impatient mother’s permission, I propped him up on my lap and primed the engine, instructing him to hold the start button. As the 110 CI Screamin’ Eagle V-Twin sputtered and roared to life, he laughed and giggled maniacally, clapping his hands - a future rider no doubt. His mother seemed less impressed but I certainly made his day.

Circling Georgian Bay on the west side involves crossing the main channel between Lake Huron and Georgian Bay on the Chi-Cheemaun ferry. I arrived early so killed some time watching boats go by and enjoyed some fresh fudge from the Wigwam Gift Shoppe, which I highly recommend. The 50 km ride from South Baymouth on Manitoulin Island to Tobermory on the tip of the Bruce Peninsula takes about two hours and travels between the islands of Fathom Five National Marine Park, and passes the Imperial Tower of the Cove Island Lighthouse making you feel as if you’ve travelled to Nova Scotia even though you are only hours away from the city. Chi-Cheemaun, which I discovered means “Big Canoe” in Ojibway, is large enough to carry 143 cars and 638 passengers. I had no idea how large this ‘big’ ferry was and was surprised to see a number of transport trucks emerge from its raised nose upon docking. Spots fill up quickly so if you plan on doing the same, book early. 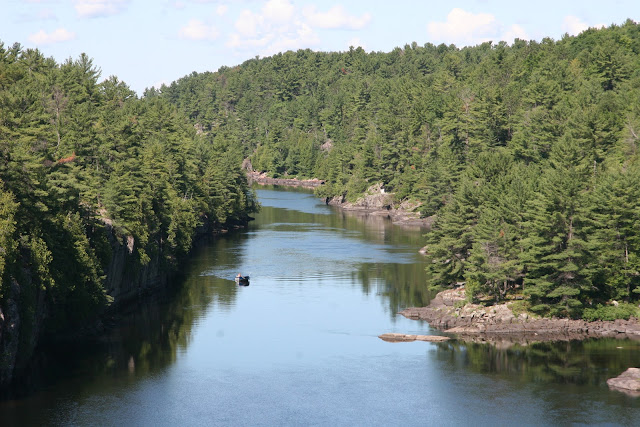 Being fortunate enough to have travelled all over the world, I am always amazed at how beautiful and diverse my own province is. Another reason why I wanted to visit Tobermory was the Fathom Five National Marine Park, which offers crystal clear water, grottos, and fascinating rock formations known as “Rock Pillars” like Flowerpot Island, not to mention 22 shipwrecks. Once a bustling port, Big Tub Harbour is the deepest natural harbour in the Great Lakes which offered shelter during inclement weather. Old wooden schooners, freighters and tugboats from as early as the 1800s reside in their final resting places at various depths surprisingly intact due to the frigid temperatures and lack of Teredo Worms (termites of the sea) that don’t exist in fresh water. These eerie relics serve as reminders of a time when weather forecasting and navigation were far less sophisticated and effective than they are today.

Visiting the Big Tub Lighthouse helps tell the story of the area, which is rich with nautical history and geographical anomalies. I wandered up the road to have a nice dinner at Bootleggers Cove Pub on the deck overlooking the water as the sun went down. Gorgeous. I then checked in to the ‘Adventure Inn the Bruce’ where I’d be spending the night and was able to drive right up to my room. Before I could even ask, one of the proprietors walked over with a slab of wood for my kick-stand. She pointed at her own Honda Shadow at the back of the parking lot, acknowledging that her and her husband do a fair bit of bike travelling in the off season so they know what bikers are looking for in accommodations. They were right. The close proximity of my door to the bike was especially helpful the next morning as I retrieved my rain gear from the saddlebags in the pouring rain.

Thankfully the skies cleared as I made my way to the Bruce Peninsula National Park and Lion’s Head down to Sauble Beach. Not only is Lobby’s Beachfront Restaurant right on the beach, but they also have “Motorcycle Parking Only” signs out front – always good to see. Eager to experience more unique landscapes on my way home, I decided to weave through Thornbury, Collingwood and over to Wasaga Beach, which I learned is the largest fresh water beach in the world! Tossing the hefty Hog around twisty turns down to Flesherton, I could spend a week exploring all the backcountry roads but I reluctantly headed back into the city. Although I hadn’t been gone for long, I was truly shocked at the amount of traffic congestion and aggressive tendencies of drivers that I hadn’t had to deal with all weekend. It turns out it only took me two days to become acclimatized to the slower, more relaxing pace of life.

The Georgian Bay and Grey Bruce regions have much to offer the two-wheeled traveler; wide open roads, genuine hospitality, motorcycle-friendly accommodations and destinations as welcoming as they are diverse. Whether travelling alone or with a group, the area offers something for everyone. On your next adventure, take the time to discover the regions’ incredibly unique geographic landscapes and fascinating nautical history, you won’t be disappointed. It won’t take long to discover around the watercooler on Monday morning who had the most interesting weekend either.