The K 1600 GT convinced the motorcycle journalists with its unique combination of comfort, performance and use of innovative technologies. The powerful in-line 6-cylinder engine was said to offer power, refinement and lots of fun. The bike's sophisticated technology - in addition to ABS, traction control and navigation system, an adaptive headlight and electronically controlled suspension with various modes increase active riding safety - makes the K 1600 GT an incomparable touring motorcycle. On the road, the outstanding qualities of the K 1600 GT are its agile chassis and unusually light handling. All this gives the rider a unique riding experience, according to the jury, impressing the most demanding touring and sports motorcyclists. 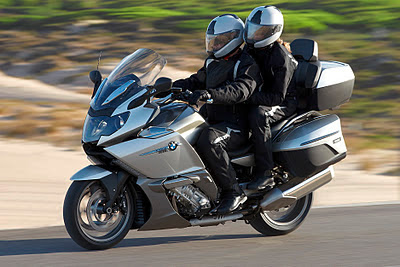 The K 1600 GTL was rated separately and also convinced the jury, finishing fourth, while the S 1000 RR followed it in fifth place alongside the Kawasaki ZX-10R. With three models in the top five places, the BMW Motorrad put in a highly impressive showing overall. 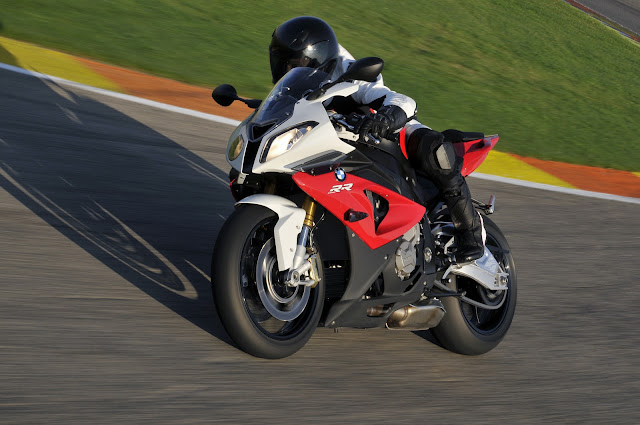 Some cool stuff from Intermot

Some cool stuff is starting to pop up on YoutTube from Intermot already!

The video shows the bike from a ton of angles and on the race track. Sadly, what it doesn't feature is the sound of the V4 engine. Instead, it features an audio track. Shame!
We took a look around and found another video which doesn't show a bunch of angles but does feature the Aprilia at idle and cranking on the throttle a little. Sounds MEAN! You've got to love the sound of a V4.

Vespa Surrey is the newest authorized dealer of Vespa, Piaggio, Aprilia,and Derbi scooters in the lower mainland of British Columbia.

Not only scooters they feature great accessory brands such as Corazzo, Nexx Helmets, Zearl Optics, THH Helmets, and Thibault. They've got factory trained technicians in the shop too, original Vespa parts and quick turn-arounds on repairs.

Be sure to check out their women's only scooter nights and events, as well as group rides, vendor shows and other unique events.

Here's the most recent recalls from Transport Canada. They affect models by Aprilia and Yamaha. The Yamaha model affected is the Trailway 200; more commonly known as a TW 200.

The person writing the Aprilia recall must have had a thesaurus nearby: "could cause a litany of drivability concerns." My dictionary gives "a repetive series" as an alternate for litany. However you say it, sounds like it's something you should get fixed ASAP. 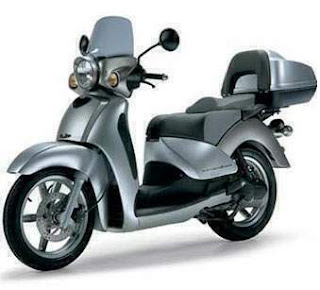 On certain scooters, should the fuel tank be overfilled, or the motorcycle be tipped-over on it's side, raw fuel may be allowed to enter the hoses of the evaporative emissions system. This could cause a litany of drivability concerns including: difficulty starting, random stalling, low power, reduced top speed, float bowl overflowing, etc. Engine stalling would result in lost propulsion which, in conjunction with traffic and road conditions, and the rider's reactions, could increase the risk of a crash. Correction: Dealers will re-route emission system hoses and replace the "Hose Routing Diagram" sticker. 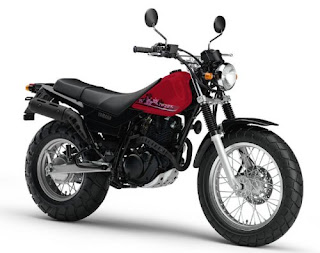 Recall Details:
On certain motorcycles, the rear shock absorber lower mounting boss could fail. Should this occur while underway, the shock assembly could detach, allowing the rear suspension to completely sag, possibly resulting in a loss of vehicle control and a crash causing personal injury or death. Correction: Dealers will replace the rear shock assembly with an updated version.
Comments

World's biggest motorcycle exhibition will open its doors on November 4th at Milan, Italy to an ever increasing public. 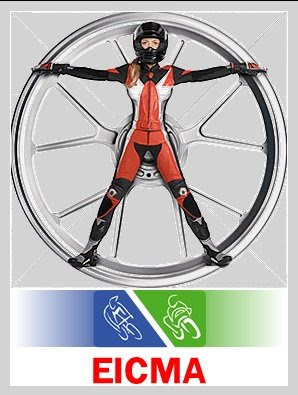 This year at Milan's EICMA exhibition, we should see several new motorcycles and scooters - probably not as many as last year when it seemed everybody had something new.

But like at Intermot show in Germany, there will no doubt be a lot of Asian manufactured electric motorcycles and scooters showcased.

The main conference day is Tuesday, with 2 conferences called on Monday and one on Wednesday.

Several companies have announced that they're be doing a press conference at the show. Which would generally indicate that they have something interesting they want to make public - but time will tell. Here's the list of companies:

Yamaha - Yamaha have organized a conference the day before the show opens (Monday), and it's held off-site.

Ducati - They're having their press conference the day before the show opens. Fighter model perhaps?

New Max - New Max have several brands of clothing and helmets. Haven't heard of these folks.

BMW - Having already announced three new K series models at Intermot it's hard to say what they'll have to say.

Husqvarna - These guys immediately follow BMW (they're a subsidiary of BMW) and both are scheduled for 30 minutes a piece.

Leo Vince - Might be a good guess that the Italian Leo Vince will probably be presenting new exhausts.

KTM - KTM have two conference, one on Tuesday and one on Wednesday (together with Zadi - an Italian parts manufacturer). Rumors are that they may show an electric motorcycle.

Aprilia - The Piaggio group's Aprilia have 15 minutes so not too much time for big announcements here.

Kymco - Scooter manufacturer Kymko rarely call for conferences so there will likely be something new out of this Taiwanese company.

Nipponia - Never heard of these guys.

Suzuki - Suzuki have 30 minutes but announced new bikes at Intermot so we're not sure what to expect here.

Italian's not coming to Canada

The recently held German Intermot show was a chance for many manufacturers to show off some new bikes. It was a busy week with new models galore!

What kind of specifications does the bike have? Well, for starters the chassis is made from steel tubes, sporty suspension is by Marzocchi, and radial brakes by Brembo. 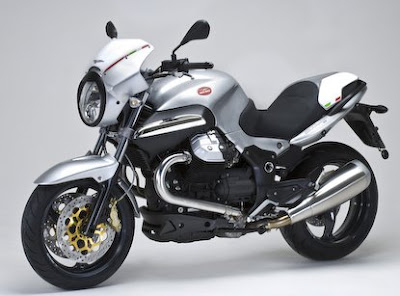 ABS stoppers are optional as are heated grips, panniers, top box, and GPS.

It's a sporty looking machine with a minimal front footprint. Guzzi has said that particular attention was paid to making the passenger seat a comfortable place, so despite the sporty appearance it should be a great two-up rider. You may notice that the passenger footpegs are a bit more rear-ward and higher up than on models like say the Breva.

Another Italian model was shown off too - the Aprilia Shiver GT. 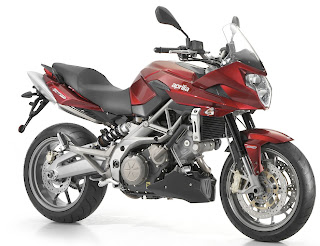 The GT adds to the standard model that gives the machine a fresh face in the form of a half-fairing to make the bike a bit better suited for sport touring.

The engine remains unchanged which isn't a bad thing; you get the 95 hp, 750 c motor with standard ride-by-wire throttle. The engine also has adjustable mapping for sport, touring, and rain riding. Sport is normal power delivery, with maximum power and torque; Tour scales back the responsiveness a bit; Rain does that and reduces the 60lb/ft of torque by 25%. You'll also get 43 mm USD forks, radial mounted brake discs and optional ABS are also featured on the GT version.

Canada Scooter Corp, who are the importers for the Guzzi and Aprilia brands to Canada, reportedly have no plans to bring the bikes to Canada but reserve the right to change their mind when they announce the new line-up in December. So we'll have to wait and see.

If past performance is an indicator of what may happen in the future though, Canadians will likely have to wait a little while (typically a model year) before we see the latest Aprilias and Guzzis on our roads.
Comments

A motorcyclist from Ireland is touring the world aboard his trusty Aprilia 650 (a clone of the popular BMW 650 single - but not available in Canada). He's not tackling the entire globe all at once, choosing instead because of budget to do it in sections.

Paddy Tyson mentions in a conversation with a Bugle Observer reporter in Woodstock, New Brunswick that New Zealanders are typically known as some of the friendliest in the world; hospitality that he's been lucky enough to experience first-hand. But, his trip through the Maritime provinces of Canada have made him reconsider this ranking. He's said that Maritimers are the most hospitable people he has ever met in his life. "Here I am just stunned by the hospitality" said Tyson.

Hailing from County Fermanagh, the westernmost of the six counties that form Northern Ireland. He has already toured extensively throughout northern Europe. Tyson's current leg is one of the long ones. He'll be traveling through North, Central, and South America. He's already done the Australia, New Zealand, and Philippines portions of the trip.

He's a bit of a magnet for attention on his Aprilia 650 since it's not available in Canada. Not only that though, its yellow Great Britain registration plate, big Ireland sticker, and twin auxiliary tanks that allow a 600 km range is all the conversation starter that's necessary.

The bike certainly attracted some attention in Halifax, where he landed in Canada. It took five days to clear customs there. He became quite a familiar fixture in the office in fact, staying from 9-5 each day. Luckily the hospitality made up for some of that unpleasantness!

He's traveling with a $50 a day budget and trying to camp whenever possible and in the Maritimes at least he's done quite well with that budget, having been offered places to stay, meals, cups of tea, and plenty of helpful advice and conversation.

Some new Aprilia's are on their way to Canada. According to reports it is said that Canadian Scooter Corp, the distributor for Aprilia's in Canada has indicated that they'll be bringing the 90° V twin engine, Mana 850 to Canada. It's still not listed on Aprilia's Canadian website. Now - one thing in particular make the Mana a little special. Its got a unique selectable mode, semi-automatic transmission they call the sportgear transmission. Okay, so that may not be terribly exciting to a great number of motorcyclists but if you're traveling in stop and go, bumper to bumper traffic, an automatic motorcycle might be a really good thing. No more working the clutch. - Sequential mode: The rider decides for himself when to change gear, either using the conventional pedal or a switch on the handlebars. A servo mechanism shifts the main pulley to change between the seven gear ratios amazingly quickly. During deceleration, if the rider omit to change gear manually, the control system intervenes to change down automatically, preventing engine speed from dropping below the set threshold and providing another valuable aid to active safety.

- Fully automatic mode (Autodrive): Sophisticated electronics assume control over everything, and the CVT transmission keeps the engine running at maximum torque speed for optimum pickup and acceleration. The Sportgear transmission offers a choice of three mappings:

1. Touring: for minimum consumption and maximum usability.
2. Sport: for top performance with blistering acceleration
3. Rain: for use on wet or slippery roads

The area where the tank is on many motorcycles is actually a storage area on the Mana and will fit a full face helmet and the tank moves under the seat. The engine delivers 76 horsepower at the crank and in excess of 53.7 ft-lb of torque (at 5,000 rpm.

Stopping power should be stong as the bike features 4 piston radial calipers 320 mm discs in the front and a single 260 mm rear disc.

Along with the Mana they'll also be bringing the Stelvio - a BMW GS competitor.