The product is safe to use on numerous surfaces ― plastic, fiberglass, chrome, metal, glass and rubber ― this spray, specially formulated for powersports, provides a water-resistant, protective film that enhances color and hides flaws, restoring that desired factory-finish look and sheen to machines.

The durable coating will resist dirt and dust, making it easier and faster to keep equipment clean. Regular powersports cleaners can be used for easy wipe down, since the spray's unique finish thwarts dust and dirt from sticking to machines.


"Bel-Ray has long been recognized as a leader in the manufacture of premium quality, high-performance powersports lubricants," said Jennifer Liquori, Chief Operating Officer at Bel-Ray. "Now we can help powersports enthusiasts take care of their machines, both outside and inside, to get a shiny machine that performs better."

For more information on Silicone Detailer and Protectant Spray or other Bel-Ray products for powersports, visit www.belray.com

The first round of the 2012 MotoGP series began this weekend at the Losail circuit in Qatar with the Bel-Ray sponsored Team Aspar in action. The Spain-based team competes in all 3 divisions of World Championship racing and fields two rider teams in each class. 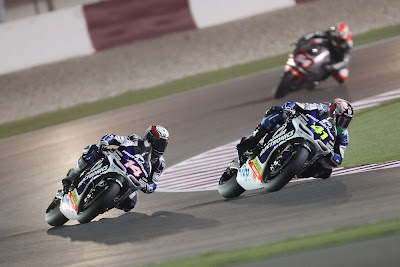 Team Aspar’s entry in the premier MotoGP class consisted of Randy DuPuniet and Aleix Espargaro. The Power Electronics Aspar riders had a difficult opening round of the 2012 season, with many unexpected setbacks, limiting their success. Both riders persevered through adversity and finished within the top 15 against the best MotoGP racers in the world. DuPuniet was 13th and Espargaro was 15th at the end of the race.

Bel-Ray’s entry into the Moto2 class for 2012 consisted of the Mapfre Aspar racing team. Toni Elias and Nico Terol are the team’s riders in this highly competitive class. Competing within the Top 10 during the early laps of the race, Elias slipped back to a 13th place finish after struggling with tire grip as the event drew to a close.  In his Moto2 class debut, Terol looked strong, but an over-exuberant charge through the pack saw him run-off track early and he was only able to recover for a 23rd place finish.

The Moto3 class is the newest class in world championship classification for 2012. Replacing the 125cc class, Moto3, promises to be a competitive, exciting addition to the race day schedule. Hector Faubel and Alberto Moncayo are the Bel-Ray racers in the class aboard the Bankia Aspar team. Despite struggling all weekend with chassis handling problems, both racers were able to put in respectable rides in the inaugural race. Faubel scored a 12th and Moncayo scored a 14th place finish at the end of the race.

The MotoGP series continues in Spain on April 29th.

The 2012 FIM World Motocross Championship Series began on Monday in Valkenswaard, Netherlands with Bel-Ray racers considered to be favorites for the victory.

Team Floride Monster Energy Kawasaki Pro Circuit is Bel-Ray’s entry into the MX2 class with team riders Joel Roelants and Tommy Searle. During Monday’s racing action, both racers were amongst the best in the competition, as Roelants scored 3-2 moto finishes for 2nd overall and Searle used 2-3 moto finishes for 3rd overall. Both racers showed that they has the speed to win and will certainly be top contenders as the series continues. Bel-Ray's entry into the MX1 class was not as successful, as Team CP377 Monster Energy Kawasaki Pro Circuit racers Christophe and Sebastian Pourcel struggled during the first moto of the day. Sebastian finished 23rd and Christophe finished a disappointing 32nd. Christophe rebounded in the second moto with a respectable 9th place, while Sebastian also improved on his first moto results, scoring a 18th place for his efforts.

The World Motocross series continues in Bulgaria on April 22nd.

Competition gets underway in Qatar and the Netherlands as the MotoGP and World Motocross Championship both begin their quest for global racing glory. 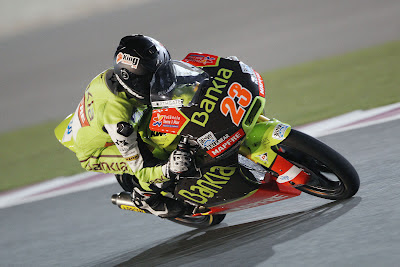 Bel-Ray sponsored Team Aspar will field three separate racing teams in all three forms of world championship competition. The Power Electronics Aspar team of Randy Du Puniet and Aleix Espargaro are both competing in the MotoGP class aboard their ART Aprilia. The Mapre Aspar team of Toni Elias and Nico Terol will compete in the Moto2 class and the Bankia Aspar team of Hector Faubel and Alberto Moncayo will fly the Bel-Ray colors in the Moto3 class. The series begins this weekend in Qatar and ends in Valencia, Spain in November with stops across the entire globe in between. All 3 Bel-Ray Aspar teams are expected to be contenders for victory each event.

Bel-Ray is fielding two of the most competitive teams in World Motocross championship competition for the 2012 season. In MX 1 competition the CP377 team of Christophe and Sebastien Pourcel will be using the performance advantages that Bel-Ray offers. Both Pourcel brothers are considered threats to win on a regular basis and Christophe is on the short list of World Championship title contenders. Team Flouride is the MX2 class Bel-Ray racing team. Englishman Tommy Searle and Belgian Joel Roelants have been consistent top finishers throughout their careers are both threats to win the World Championship this season.

Bel Ray Company Inc was founded in 1946 and is a privately held, woman owned business serving the lubrication needs of powersports, industrial and mining customers worldwide. Bel-Ray is recognized as the leader in the specialty lubricants industry for setting high standards of quality and performance with products formulated for the motorcycle, automotive, aviation, energy, food, marine, military, mining, OEM, Industrial steel, and textile industries.

“Flex Your Engine” with Bel-Ray’s superior Powersports line that delivers top quality Made-in-the-USA products to motorcycle and recreational vehicle enthusiasts around the world. Bel-Ray products are available at powersports dealers worldwide. Visit Bel-Ray.com for a complete dealer listing. Like us on Facebook.com/BelRay or follow us on Twitter/Bel_Ray