Bombardier made an offer on Buell - Harley declined

According to Motojournalist Alan Cathcart - Canadian manufacturer BRP (Bombardier Recreational Products) had made two offers to take the Buell line from Harley-Davidson. Both of them were declined by Harley. 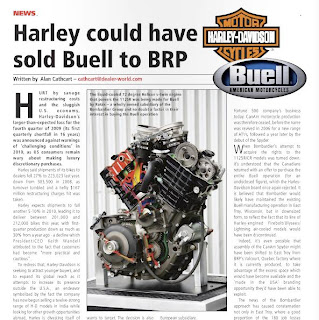 The liquid cooled v-twin that is used in 1125cc based Buell bikes is make by Rotax - a wholly owned subsidiary of the Bombardier group and BRP was interested preserving the existence of an important customer... ie: Buell.

How interesting indeed!  Erik Buell has reportedly signed a 15 month non-compete clause so watch out for the day that ends.  Still - the 1125cc based Rotax engine will be off limits as it's still owned by Harley.

BRP would have perhaps been able to use the 1125cc engine in their Spyder bike which now use a 990 cc Rotax engine.  Maybe they would have been able to build a successful business out of the Buell brand too?