Jeff Pennock over at Virtual Riding TV let us know that he's posted a new Canadian motorcycling video. He tells me that he's got over 100,000 km's on his Harley Davidson V-Rod at this point. So you know he's seen a lot of Canada!  He has traveled coast to coast in fact and has HD video of a lot of it.

Check out his newest video below and be sure to visit http://www.vridetv.com to see all of his other video's and content:

FP Husqvarna / Zip-Ty Racing Canada’s Ryan Graffunder put his TXC 450 on the podium again at the Penticton, British Columbia rounds of the Canadian Enduro Championship. Graffunder fought his way to a 3rd place finish in the highly contested E2 Class at round three of the Canadian Enduro Championship (CEC). Rounds 3 and 4 of the CEC were held at the spectacular Apex Mountain ski resort.

While the rest of the team chased podiums in BC, Karine Geoffrion was once again holding down the fort at 5th round of Quebec’s FMSQ series. Karine romped her way through the Saint-Michel-des-Saints course on her WR 125 two stroke to snag her third win of the year.

Graffunder now sits in a solid 2nd position in the E2 class, and 3rd overall, after 4 rounds of the 8 round series. Geoffrion’s win streak has put her within a single point of taking over the lead in the Championship from Vanessa Marcoux as they cross the half way mark in the 10 round FMSQ series.

Graffunder pushed hard during round three of the CEC series to claim his third podium in a row and backed up the amazing results that the 19 year old earned at the opening rounds in Blairmore, Alberta.

Unfortunately, Ryan’s podium streak would come to an end the following day at Round 4 of the series. The young gun from Vavenby, BC would fight his way through some major issues only to get pushed off the podium as the result of mistakes in the day’s second Extreme test that cost enough time to drop him to 5th for the day. Graffunder still maintains 2nd position in the E2 Class after four rounds and 3rd position overall in the Pro Class.

“Round three was pretty good to me” said Graffunder. “It was a great race course and I was really confident through all my tests. I felt strong in the Cross test and the Enduro test and was definitely enjoying the challenges of the Extreme test that they built for us this year. It was great to get on the box again and I felt comfortable going into round four.

Things got crazy for me on Sunday and then I made some mistakes in the second Extreme test that left me sitting in 5th position for the day. I lost over 40 seconds on that test compared to my first lap and I only missed the podium by 35 seconds so that test pretty much ruined my day.

It was a tough day all around. I bent my front brake rotor badly when I nailed a rock or something during the Enduro test so Guy (Giroux) helped me straighten it the best we could on the trail. When I got back to the pits and we went over my bike we realized that I had punched a hole in my radiator. Everyone had to scramble to replace it before my start time.

It was nuts with three people working on the bike at the same time but the crew got it fixed and I was able to cross the start line without suffering a time penalty. We made it with only a few seconds to spare. To end my day, I managed to smoke a rock in the final Extreme test that destroyed my brake pedal. I rode the last sections of the test with no rear brakes but I’m definitely not using it as an excuse because I didn’t even notice that it was broken until after the test.

I had a bit of a tough time here last year as well so to get through this weekend, considering how Sunday went, and still be sitting 2nd in E2 and 3rd overall is pretty exciting. I’m really looking forward to the Eastern rounds”. 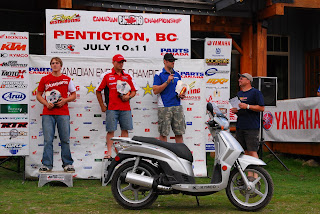 Graffunder was not the only one to have an up and down weekend as the rest of his Husqvarna Canada team mates suffered from a combination of bad luck and small mistakes that would keep them off the podium. After nailing podium positions at the first two rounds in Blairmore, Marty Halmazna from Cochrane, Alberta missed the E3 podium on his big TXC 510 by mere seconds on each day of the Penticton rounds.

“I had a decent run going on Day 1” said Halmazna “and was sitting in podium position after the first few tests. In the final lap of the day I could smell oil really bad. I looked down and realized that there was a big hole smashed through the engine case and that oil was spurting everywhere. I was able to nurse the bike to the start of the Extreme test. I used a rock to pound a stick into the hole in the case and was able to get some oil to fill it back up.

I went as easy as I could on the bike through the final test and got back to the pits. It was really frustrating to go through all that and then find out that I had missed the podium by only 7 seconds. We pulled the case off and repaired the bike after the race. Luckily the damage was not too severe and we were able to get it fixed so that I could go the start line again on Sunday.

Day two was going okay and the bike ran fine. I was feeling pretty good and thought I was in a podium position but I have to give credit to Geoff Nelson as well as Brent Kroeker, Kevin Pelletier and Ian Mckill. I only missed the podium by 4 seconds and I definitely made a couple of mistakes but those guys stepped it up and rode great. The racing is intense and I am fired up for the next rounds”.

Halmazna now sits tied for 3rd place in the E3 Class after four rounds with Ian McKill at 74 Championship points each.

Guy Giroux and Nick Graffunder both had a tough time in Penticton and will be out for redemption when the CEC heads East for the final four rounds. Although Giroux posted top 3 times in the Cross tests, he struggled with the steep down hills of Apex Mountain’s Enduro test and was unable to get the results that he wanted.

Giroux will be hoping for a repeat of last year’s CEC series where he struggled with the mountains in the Western rounds but was able to rebound in the slippery conditions of the Eastern rounds to secure podium positions and finish the year 2nd in the E2 Class and Top 5 overall.

In the E1 Class, Nick Graffunder continued to endure the streak of bad luck that has plagued him for much of the 2010 series. At round three, Nick managed to slam a big bolder in the nasty rock section of the Extreme test that left him with a destroyed rear sprocket on his TXC 250. Nick lost a massive amount of time as he struggled to drag his bike to the finish of the test.

Graffunder’s luck was not much better on Sunday but he was still able to close out the Western rounds with 6th position in E1 and having accumulated almost twice as many championship points so far in 2010 as he had gathered by the same time in the 2009 edition of the series.

“I know that my results have improved a lot over last year but that doesn’t hold much water for me right now. I know I can get on the podium and I won’t be happy until that happens. I’ll be training hard in the next little bit and I plan to come out swinging when we head East” said Graffunder.

In a repeat of the previous weekend, Karine Geoffrion hammered her way to another win in Quebec while the rest of the team chased podiums in British Columbia. Karine rode a solid race at the 5th round of the FMSQ series held in Saint-Michel-des-Saints, and finished the race more than a minute ahead of 2nd position.

After scoring her third win of the year, Karine now only trails Vanessa Marcoux by a single Championship point (116/115) as they head into the second half of the series.

With 5 Pro Class podiums in the opening rounds of the Canadian Enduro Championship and over a dozen podiums in Regional races across the country, the new Husqvarna Canada Team is off to a great start to the 2010 season.