Young Racing Towards a Cure in Support of Laps 4 MD

As Muscular Dystrophy Awareness Month concludes Canadian resident Ben Young, who competes in the British Superbike Championship (BSB) with Team WD40, is proud to announce his participation in the Laps 4 MD fundraising initiative in support of Muscular Dystrophy Canada.

Celebrating 60 years of progress Muscular Dystrophy Canada supports people affected by muscular dystrophy and related muscle diseases. Together, these rare conditions are referred to as “neuromuscular disorders.” Neuromuscular disorders are a group of diseases that weaken the body’s muscles. 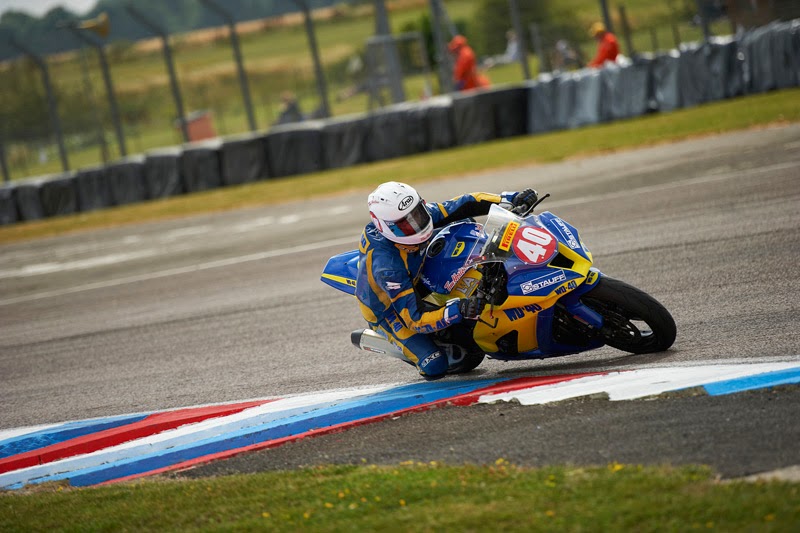 In support of the Laps 4 MD “Race for the Cure”, Collingwood-based custom home builder and longtime sponsor Scot-Build Developments Inc. will donate $2 per lap completed in the Top-15 by Young in the remaining two rounds of British Superbike Championship at the Silverstone GP, 03-05 October and Brands Hatch GP, 17-19 October.

Young earned his best finish of the season so far with 12thplace finish the last time he raced at Silverstone and followed up this result with a 14th place finish at Donington Park earlier in September.

“I’m thrilled to welcome Ben to the Laps 4 MD family of racers and greatly appreciate his and his sponsor Scot-Build Developments’ support! Ben will not only be our first international racer he’ll be the first motorcycle rider to race towards a cure on behalf of Laps 4 MD.” said Laps 4 MD founder Brad Miller

“Its an honour to help support Laps 4 MD and their efforts to help make a difference in the lives of over 50,000 Canadians affected by neuromuscular disorders.” said Young

The Motorcycle Ride For Dad celebrated its10th anniversary by holding a cross-Canada tour this August in support of the fight against prostate cancer and the Military Families Fund. The tour was about raising awareness for these two serious causes, but it wouldn’t have been a motorcycle event without a little fun. To make this happen, Deeley Harley-Davidson

Canada donated a 2010 Harley-Davidson Fat Boy motorcycle to be awarded to one lucky participant of the tour. West Kelowna’s own, Maurice (Moe) Cardinal’s name was drawn from thousands to receive this one of a kind bike that will be presented at a press event being held on this Saturday at Kamloops Harley-Davidson®.

Custom painted by Roger Pouw of Extreme Measures Kustom Paint, the bike featuring the Motorcycle Ride For Dad “Ribbon of Steel” logo, promoting prostate cancer awareness, and is emblazed with flames. It’s sure to turn a few heads as the 76 year old Mr. Cardinal rides down the streets of Kamloops. Moe, who raised over $800 for the two causes, is no stranger to motorcycles. This retired RCMP officer has been riding for fifty-six years and spent five of those years riding a police issued Harley- Davidson® motorcycle. He also is committed to the fight against prostate cancer and serves on the executive committee of the Kelowna Chapter of the Motorcycle Ride For Dad.

About the Motorcycle Ride For Dad

The Motorcycle Ride For Dad is Canada's largest annual motorcycle event dedicated to fighting prostate cancer through research and awareness. From its humble beginnings, the Ride For Dad has grown to include 29 cities in every province in the country. Now in its 10th year, more than 100,000 men, women and children have been involved, raising more than $7 million to fight prostate cancer. www.MotorcycleRideForDad.org / www.RideForDadCanada.org
Comments

Patrick Trahan has another adventure lined up for Spring 2011

Patrick Trahan (2010 Dakar competitor and Canadian) has a new adventure lined up for the Spring of 2011.  He's going to circumnavigate Africa, by himself, without support and the money raised for the event will be given to the Children's Wish Foundation.

More details of the event can be found on his facebook page HERE.

Here's a little summary in his own words about the event:

One man, One bike, One continent, One goal

Follow Patrick Trahan has he attempts a circumnavigation of Africa on his Honda motorcycle solo and no support! he will raise funds for the Children's Wish foundation of Canada. His goal sell the KM of the expedition 27,000. Each kilometer are sold 1$. Plus achieving a world record.

Keep posted for the web site! 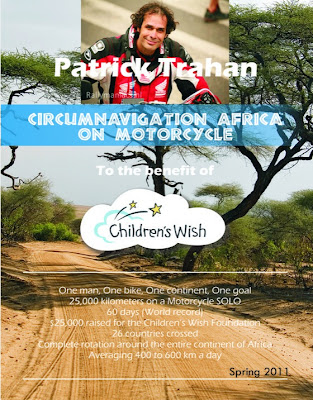