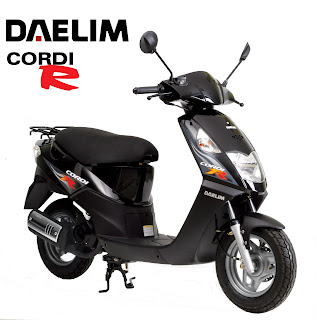 It's the year of the scooter invasion! Scooters seem to be on the minds of frugal Canadians everywhere. Even the middle-aged Volvo driver down the street who's never ridden a motorcycle before. Manufacturers are hearing their calls and answering.

National Motorsports is going to be introducing two new scooters from Daelim.

Many Canadian's may not be familiar with Daelim but it's not a new company - just new to Canada. Daelim Motor Corp was founded in 1962 and is based in South Korea. They started out making scooters and motorcycles in a coalition with Honda Motor Company of Japan.

Today, Daelim is capabale of pumping out 300,000 units annually. Their products come with a 2 year, unlimited kilometer factory warrranty.

The two Daelim models making their way to Canada are the Cordi 49cc and the S1-125 which is a 125cc machine.

The Cordi is an air cooled 2-stroke and should have an MSRP right around $1,995. Just shy of $2,000 gets you disk brakes up front and drum brakes in the rear, and an oil injected fuel system.

The S1-125 is a more sophisticated air/oil cooled 4-stroke which will have an MSRP of $3,945. The S1-125 uses an electronic fuel injection system and comes with disk brakes in the rear as well as in the front. 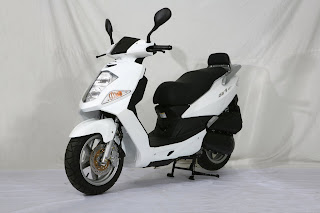 More details on Daelim Motor Corp can be found here.

For more details on National Motorsports and the products they distribute in Canada check them out here.
Comments