We've told you about the Hayes Diversified Technologies diesel motorcycle before but something interesting is afoot!
HDT have been making diesel motorcycles for the military for several years now and haven't had the capacity to produce bikes for the US Marines and civilian use. It looks like times have changed and they have a sign up to be placed on a waiting list for a Fall 2010 release. The bike is called the AT-1 and it features a single cylinder 670cc diesel engine. 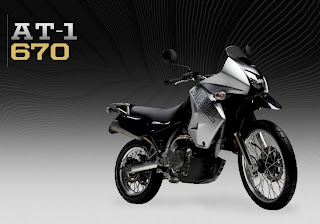 The AT-1 starts with a KLR 650 as a mule bike with a very efficient diesel engine into it. How efficient? How does 105 miles per gallon sound? It'll also reach speeds of up to 95 miles per hour.
It won't be really cheap ($16,900 USD + tax & shipping) but it could be just the ticket if you're into adventure touring and want something that's going to be very reliable and will go as far as 1,030 km's between fill ups.
Some other interesting specs:
Power 36 PS @ 5700 RPM:
Torque 58 Nm (43 ft-lbs) @ 3300 RPM
Transmission: 5‐speed, constant mesh
Curb weight: 203 kg (447 lbs)
Colors: Black/Silver or Silver/Black
For more details check out HDT's website HERE.
Comments

Some breaking Internet rumor is surfacing about Yamaha developing an inline 4 turbo-charged diesel motorcycle. Hell For Leather has come upon what are patents reportedly filed in July by Japanese motorcycle manufacturer, Yamaha.

In the patent drawings it appears that the intercooler is located above the engine or could be concealed in the frame; the turbocharger itself is mounted adjacent to the cylinder head. This placement provides some protection for these sensitive components.

If it gets the green light, Yamaha would be the only major manufacturer producing a diesel motorcycle. 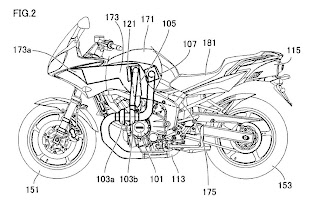 A while back we told you about what might be THE ultimate adventure touring motorcycle. Made by a company in the Netherlands, it's called the Track-T800CDI Diesel motorcycle. 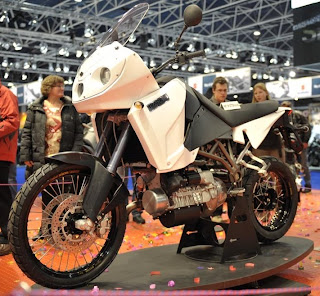 Why are we telling you about this again you may ask? Well, it's a long shot and a little more than a year away from even becoming a possibility... but they might come to Canada! Read on for more details.

The motorcycle incorporates a diesel engine based on the one used in the Mercedes Benz produced "Smart ForTwo" car. In EVA's application it produces 45 bhp (same as the Smart ForTwo) and a bit less torque; 74lb/ft vs the 81lb/ft of the ForTwo. The power and torque is distributed across a wide, and decidedly low, rev range of 1,800 to 4,500rpm.

It's reported that just 150 units will be built this year, but the company plans to expand production from 5 to 25 bikes a week in 2010. 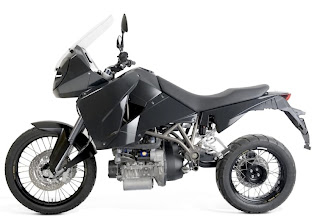 The CVT transmission when coupled with the diesel engine delivers fuel sipping economy of up to 112mpg at 55mph. An added benefit of the diesel engine is that it provides unbelievably long service intervals. Like up to 31,000 mile. Engine life is anticipated to be in the range of 250,000 to 375,000 miles.

Currently the Track T-800CDI diesel motorcycle is only available in the Netherlands. Sales will open to the rest-of-Europe in 2010. Canada and the US are being considered for the end of 2010 depending on how things go domestically, exchange rate fluctuations, and plenty of other factors.

EVA was thinking about having 2wd as an option and aren't ruling it out in the future, but current testing has shown negligible benefit. Other adjustments such as the torque produced and steering lock angles permitted produced more significant advantages. So, the focus is on higer performance modifications than the 2wd for now.

The price on the EVA site is listed at 17,500 euro's which at a direct conversion to Canadian dollars is $28,900. Better start saving!

The EVA Products BV Nederland is going to be unveiling what might be the ultimate off-road touring machine. It's a 800cc diesel powered motorcycle that'll offer an optional front wheel hydraulic drive system. Some other interesting options are full aluminium luggage travel system, and a desert-sand lifting device. 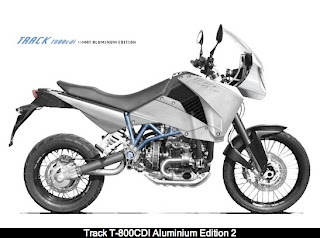 The in-line three cylinder diesel offers approximately 50 bhp and is both turbocharged and intercooled. What it lacks in horsepower it makes up for in brute torque, a whopping 130Nm of torque from 1800 rpm upwards.

Many motorcyclists may not appreciate not being able to work through the gears because it comes with a CVT (Constantly Variable Transmission). What they may appreciate is that the CVT keeps the bike at at optimal RPM range which improves the fuel economy even further. It's said the machine sips fuel at 2.1 l/100km at 90 km/hr. If you're in a real hurry and pick up the pace to at 175 kmh, it’ll reportedly still get 4.2 l/100 km.

The bike is reportedly going to be shown at the Utrecht Dutch motorcycle trade fair in February.

What does all this cost? Well - that's the kicker! The bike will have an initial price tag of EUR 17,500, which if you did a direct conversion to Canadian dollars would be just shy of $30,000. Ouch! I wouldn't be looking for this bike to show up in Canada any time soon or even in the distant future. If you're interested in diesel motorcycles a little closer to home you may want to check out the HDT Diesel MD670F “Bulldog” that's built in the US.

It's a cool looking machine though, and for those whom money is no object it may be a great adventure touring tool.
Comments

A while back we brought you a story about Hayes Diversified Technology (HDT), a US company that are the largest supplier of military motorcycles to the US Defense Department (according to their website) and their diesel powered KLR. Some additional news has come out about the machine and the company that we thought we'd fill you in on.

The final specifications aren't available for the BullDog yet but it is said that it weigh less than 400 lbs dry. It's estimated by Hayes to have a range of approximately 600 miles, or about 965 kms. This is slightly lower than our estimated 1000 + km's, but pretty close.

Interest in the BullDog has skyrocketed due to a lot of recent press. The company is relatively small though and are focused on building to meet the demands of their military contracts at the moment. They believe that it'll be 2009 at the earliest before they can produce a model for sale to the public. When they do produce them, the first run will likely be limited to 200 machines.

Hayes Diesel MD670F
No word on cost yet but the original model (based on pre-2008 KLR) that was initially intended to be sold to the public but fell through was slated to cost a whopping US $19,000. Hopefully some of that was due to the initial development costs for the diesel engines which have been offset by their military contract success. Time will tell.

The company is said to be working on some other exciting projects too like 4-wheeled light utility vehicles, remote controlled observation planes, AND a turbo-charged 1400 cc diesel powered cruiser. Now, that should be interesting!
Comments