The 2013 Halifax International Motorcycle Show wrapped up this Sunday and turnout was affected by the snowstorm that hit the east coast on Saturday and Sunday but the die-hard enthusiasts still made it out and enjoyed easy access to motorcycles from every brand.

Check out our big picture gallery from the show. The Honda FB6 was definitely a stand-out motorcycle for me. It's impressive looking and feels all day comfortable.

One lucky attendee took home a Honda CBR250R as a door prize. His odds were a little better because of all the snow!

Enduro Engineering has outfitted many of the top American enduro riders for years and feels that the time is right to bring these services to Canada through an exclusive agreement with Ross Rocher Sales of Stratford, Ontario. “Robbie Lang, Head Suspension Technician has had extensive training at the Enduro Engineering Headquarters learning the suspension business from the legendary Alan Randt. And now we feel that supporting the CGRT team will help us benefit from their exploits on a national level”commented Scott Rocher.

CGRT is excited to partner with Enduro Engineering for the upcoming 2010 season. Shane Cuthbertson adds that “although the stock Husaberg suspension is very good right out of the box, I feel that Enduro Engineering’s extensive experience in the woods combined with setting obtained from years of tuning for several of the top American pilots will help enhance my performance.”
Comments

Spring has sprung and along with it comes a much anticipated racing season for the Corner Grass Racing Team (CGRT). The ice racing spikes have been replaced with rubber knobbies and CGRT in excited to start the season with the opening round of the CMA Alberta Harescramble series this coming April 10/11th weekend in Lethbridge, Alberta.

The five member team will once again be the official Canadian Husaberg Factory supported team lead byveteran Shane Cuthbertson whom is looking to improve upon his 2009 Canadian Enduro  Championship (CEC) 3rd place overall finish in the highly contested E3 category. This year Cuthbertson will be equipped with the all new 2010 Husaberg FX450 and is anxious to get the season underway. He will however have to wait until June for his first taste of dirt as some elected surgeries during the off season are keeping him away from the bike for now. “I am really chomping at the bit to get riding and it is taking all I have to keep from swinging my leg over the ‘Berg. My main focus this year will be the CEC series; so much so that I have elected not to compete at Erzberg or Romaniacs this year in order to aid in my recovery and training for the series. I am going to be fresh and fit; ready to put my best effort into Canada’s premier series!” 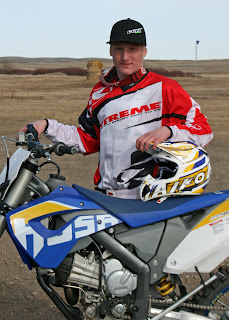 CGRT’s mission statement is to ‘provide the foundation to enable a long term focused CANADIAN effort to promote and compete in off-road motorcycle events throughout Canada, USA, and Europe.’ This year the team has really stepped up and will be supporting 16 year old Cole Dobovich in his venture to become one of the elite riders in Canada. Cole has come through the ranks within the local Alberta series and has really shown the drive and desire to improve. “We are really excited to have Cole on board! He is a great kid, has unbelievable family support, and is already a very accomplished motorcycle rider. We really want to give back to our sport and what better way than to lend our resources and experience to a young rider of his caliber” commented team manager Lee Fryberger. Cole will be competing in the Expert class this weekend aboard the 2010 Husaberg FX450, followed by several local Off-Road and MX events in preparation to represent CGRT at the CEC series where he will look to make his mark in the Amateur ‘A’ class.

Nick Riewe, Jay McGregor, and Lee Fryberger round out the team and all have plans to compete regularly in both the Alberta provincial series and the Canadian Enduro Championships. In addition to racing, these gentlemen go to extreme efforts in promoting several marquee Canadian events such as the Corner Grass Harescramble (June 26/27) and Canada’s First Extreme Hard Enduro – XTINCTION (August 21/22).

CGRT relies heavily on strong partners to help us attain our goals and are proud to announce that Husaberg, A&E Racing, Motovan, Ronwood Enterprises, Lee Built, UFA Petroleum, Limenine Graphics, Opti Lubricants, Rekluse, and Sosa Original have all continued their support for 2010. Two new partners to the team this year are Xtreme Hot Oil Services and Airoh Helmets both of whom we are very excited to have on board.

To find out more about the team and riders, please visit www.cornergrass.com.
Comments

CGRT have completed preparations for their 2010 program and are ready to launch another attack on the Alberta Endurance Ice Racing Association - Pro Open title. This year Jay McGregor and Nick Riewe will be riding a 2010 Husaberg FE570, which has been specially prepped for the brutal duty of Endurance Ice. “The 2010 Husaberg is showing to be perfectly suited for Endurance Ice racing. It’s awesome turning capability makes it very easy to ride at our limit and still conserve energy” comments Jay. CGRT begins the assault on their third Pro Open title this Sunday January 31 at Sandy Beach, Alta.

For 2010, the AEIRA series runs every weekend from late January through early March. Each event is 6 hours long (except for the famous Numb Bum 24 hour on Feb 13/14) and held on road course style tracks plowed into lakes around central Alberta. Typical lap lengths vary from 5-15 km per lap. This year the schedule totals 54 hours of intense racing and enduring the elements. For more race information on the races visit www.AEIRA.com ; and for next day race results visit www.mylaps.com under the MX category.