2009 seems to the be the year of the scooter in Canada. If you're looking for a scooter for the next riding season in Canada, your choices have never been so broad. Looks like you'll have the scooter of at least one more make to choose from too.

Motorsport Craze Ent ltd, a Langley BC company, has been given the sole rights to distribute Lambretta scooters in Canada. They're actively seeking qualified Scooter Boutiques and Motorcycle Dealerships to sell the scooters as well. All scooters are 100% Transport Canada, and EPA compliant, and include a 2 year parts and labor warranty. Parts and Scooters are in-stock in Langley, BC. These scooters are listed in the Canadian Blue Book for the January edition of 2009. 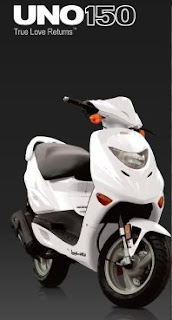 In the spring of 2009 we should see three Lambretta models hit the showroom floors. The biggest of the bunch UNO 150. It features a 150cc 4-stroke, 4-valve engine. It'll also have 12” mag wheels, front and rear disc brakes, tachometer, and 2 year limited parts and labor warranty. Dry weight is 250 lbs. Comes with an electric start and a kick. The tank will take 6.2 liters of fuel. Cooling is forced air with an external oil cooler. MSRP will be $3,299 CDN. Available colors will be red, white, and black. 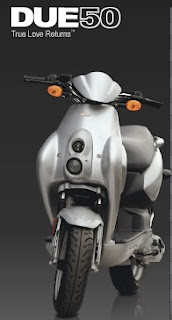 The styling of the DUE 50 is said to be "avante garde." It includes a 2 stroke engine, halogen projector beam headlamp, 12" mag wheels, front disc brake. The halogen projector headlight is a distinctive touch. The MSRP will be $2,399 CDN. Available colors will be silver, black, and orange.

The UNO 50 is also a 2 stroke, and is said to offer an "ideal blend of quality, versatility and substance." It too comes with 12” mag wheels, front disc brake, and an adjustable rear shock. The MSRP will be $2,499 CDN. Available colors will be white, black, and red. 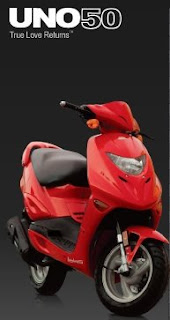 The company has a bit of an interesting history. After the Second World War the company's steel tubing factory was bombed and destroyed (it employed 6,000). Ferdinando Innocenti examined the situation and according to company lore...

Innocenti saw the future of cheap, private transport and decided to produce a motor scooter – competing on cost and weather protection against the ubiquitous motorcycle. Aeronautical engineer General Corradino D'Ascanio, responsible for the design and construction of the first modern helicopter by Agusta, was given the job by Ferdinando Innocenti of designing a simple, robust and affordable vehicle.

It had to be easy to drive for both men and women, be able to carry a passenger, and not get its driver's clothes dirty. General D'Ascanio had falling out with Innocenti. Innocenti wanted to produce his frame from rolled tubing rather than a mould and beaten spar frame, which would allow him to revive both parts of his pre-War company. General D'Ascanio took his design to Enrico Piaggio who produced the spar framed Vespa from 1946.