Peugeot HYmotion 3 to see production in 2010

According to French reports the Peugeot HYmotion; Peugeot's leaning 3 wheel scooter is set to start production before the end of 2010. We first brought you news and pictures of the HYmotion back in October, 2008. The production of the HYmotion will closely follow behind the Piaggio MP3 Hybrid. The HYmotion uses a similar two front wheel, one rear wheel design but the systems used to power the scooter differ substantially. 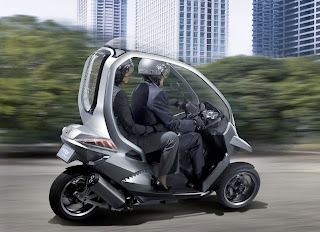 The HYmotion has electric motors powering each of the two front wheels and a 125cc internal combustion engine powering the rear. In the Piaggio MP3 Hybrid only the rear wheel is powered by both the electric motor and gas-powered engine.

Reports indicate the HYmotion should offer fuel economy in the 117 miles per gallon range. That's not quite as good as the 141 mpg estimate of the Piaggio MP3 Hybrid but the HYmotion incorporates a roof! So it will provide a lot more protection from the elements than any scooter currently on the market.

The protection that the roof offers from the elements might be just the thing that converts a lot of those people sitting on the fence about a making a two-wheeled purchase because let's face it, it does take some forethought and dedication to ride in inclement weather.

It's uncertain whether this model will make it to Canada or even the US, or what it will cost (in Europe) but we'll let you know as soon as we find out more.
Comments

French scooter maker Peugeot has somewhat quietly made an entrance to the Canadian scooter scene after getting a little head start in 2008. Canadian Importer CMI had brought the Peugeot Vivacity 50 to Quebec in 2008 but for 2009 they've bringing a more complete line, and bringing it to more dealerships across Canada.

Peugeot's Canadian website came online December 30th of 2008 and now, they've not only got an online presence, they've signed on more that 30 automotive dealers to become Peugeot Motorscooter dealers. 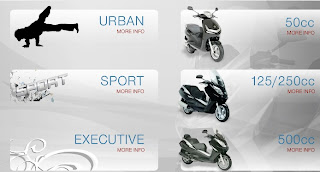 Canada Motor Import (CMI) will be the exclusive importer and distributor of the brand. The company will also carry SYM motor scooters.

The Peugeot lineup will include several 50cc scooters and also several larger models too. It's particularly interesting to note that the Satelis Blacksat 125 Compressor Executive is a supercharged model, said to offer performance similar to a 250cc scooter:

First up - this is a concept vehicle so the likelihood of it coming to Canada in the near future is very, very small. But, this concept is so interesting and a sign of where some alternative transportation is heading we just had to tell you about it.

Those who recall the BMW C1; a scooter with a roll cage and seat belts that didn't require it's occupants to wear a helmet. Well cross that (with an extra margin of cool), with a three wheeled scooter, with a hybrid and you might have something resembling the Peugeot HYmotion 3. 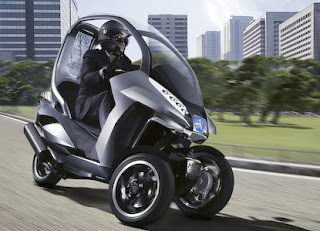 Just unveiled at the 2008 Paris Motor Show the HYmotion3 is really something! It's a two seater scooter with two wheels up front and a glass bubble roof. It's powered by a 3Kw electric motor located in each of the two front wheels with a 125cc gasoline engine in the rear (yes - it's a three wheel drive!).

The HYmotion3 has the option of being ridden in an electric-only mode, a gasoline engine only mode, or hybrid three-wheel-drive mode. It is able to hit 100km/h from a standstill in 11.2 seconds, with a maximum speed of 110km/h. 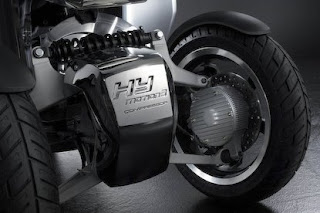 The engine itself isn't used to power the batteries; regenerative braking does that. It can run in electric mode only at low speeds and the electric motors themselves are in the front wheels.

The in-wheel electric motors are capable of producing 4bhp, and they power the front wheels independently of each other and the gasoline engine. The ride-by-wire system keeps everything in sync.

While the Peugeot MP3 has two front wheels in a similar manner, they aren't powered, still they reduce the possibility of front-end washout drastically improve braking distances. However the powered front wheels of the HYmotion3 increase performance, allowing more power to be delivered to the road earlier in corners through all three wheels being driven at the same time. 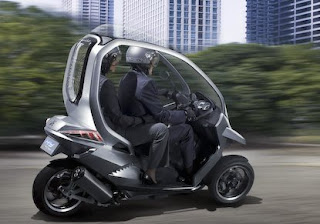 The primary source of "go" is the supercharged four stroke 125cc engine that produces 20 bhp. Combine that with the electric motors and you have performance that's on par with 400cc scooters.

The engine will stop/start that turns itself off when you're stationary (like the Toyota Prius car) and fires up instantly when it's time to get moving. All this technology produces a scooter that is capable of delivering 118 mpg while carrying two people with far more weather protection and stability than any other 2 wheel scooter on the market right now.

Peugeot is one of "the" largest scooter makers in the world so if anybody would produce this thing it's likely to be Peugeot. They sell the majority of their machines in the European where there is a high demand for large, practical scooters. So in that market, a vehicle like this makes a lot of sense.

Maybe the BMW was just a little ahead of it's time with the C1.
Comments