BMW are excited about their top 10 finish in Australia in the first Superbike race of the season and think they'll be very competitive this year with their newly developed S1000RR.

They're readying for the Losail track but know they'll face challenges because they have no bike data for the track.

Should be an interesting race! The Qatar race starts up on March 14th. See our previous post on the Superbike series for details on when it airs.

Team BMW Motorrad Motorsport head to the Losail circuit in Qatar knowing that it will be harder to get another superb top ten position than it was in the opening round of the championship in Phillip Island, Australia. In Phillip Island the team benefited from a two-day test prior to the event, but their first chance of seeing the Losail racetrack will be the first practice session on Thursday morning. The circuit in Qatar will be just the first of many tracks about which the team have no data or information from previous seasons and their task will be that much harder than that of the competitors. The first two sessions will be vital for the Troy, Ruben and the team, but hopefully the experience of the riders will help the technicians do their work smartly and provide a good platform for raceday. 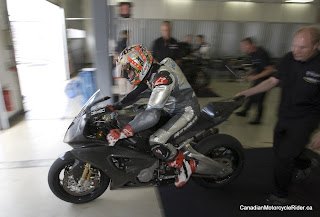 Troy
Getting an eighth in Phillip Island was a fantastic result and gave us all great hope for the season. But now we are going to a track and we have no data about if for our bike and that is going to be a big disadvantage. The race weekend in Phillip Island was real eye-opener for our team and things happened during the three days that don't happen in tests, so the team gained a lot of experience. We all have to build on that but all the guys are very committed and are working hard to push this project forward as quickly as possible. Qatar will be an interesting test for us all, but we're going to give it 100% and see what happens.

Ruben
I think that Phillip Island showed that our team is going to be competitor - and sooner rather than later. If I hadn't had two or three collisions in race one, I am sure I would've had a much better result and probably been able to challenge for a top ten place. But at least, I stayed on the bike and I'm happy because Troy got a great result in the first race and we managed to finish both races. Qatar is going to be harder because our bike will be racing there for the first time and so we don't have any data or telemetry to work from. We all have to be at 100% right from the start and push all the way to end, but this is a great team and who knows what may happen?

Berti Hauser (Director BMW Motorrad Motorsport)
It was great to finally start our big adventure and fantastic to get such a good result in the first race. If there hadn't been a problem in Superpole, who knows what result would've been possible? Our team have a tremendous work ethic and I am so happy because I think everybody can see that we mean business and that we are going to be a competitive force before too long.

A native of North Bay, Ont., Desmarais was a factory rider with the Honda Canada team and won the 1996 national Open Sport Bike title riding a CBR600F3. He was a protégé of Michel Mercier's FAST Racing School at Shannonville Motorsport Park and was a top Canadian Amateur in 1994.

Most recently Desmarais had made appearances at Parts Canada Superbike Championship rounds with privateer Suzuki efforts.

"This is extremely sad news for the Canadian motorcycle racing community," said Colin Fraser of Professional Motorsports Productions, which runs the Parts Canada Superbike Championship. "Mike was a tremendous talent and enjoyed great success. More importantly, he was a popular competitor and very well-liked in the paddock. He leaves behind many friends in Canadian motorcycling and motorsport."

A funeral service is scheduled for St. John's Anglican Church in North Bay on Saturday, March 7 at 11:00 a.m.

Donations in Mike's memory can be made to the Toronto General Hospital Transplant Unit (checks only).

He is survived by his parents Peter Desmarais (Susan) and Linda Smith, sisters Cindy Desmarais and Jennifer Desmarais, and grandparents John and Letitia Smith, and Simone Desmarais.

To Mike's family and friends everyone associated with the Parts Canada Superbike Championship offers their most sincere condolences.

Don't forget to tune in to the fourth installment of Motorcycle Experience this Saturday morning on TSN and TSN HD. Last week featured some great advice on how to deal with unavoidable obstacles and a test ride of KTM's big orange 990 SuperDuke. 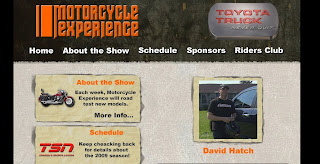 - Dave visits a BMW press launch of the new HP2 Sport at Shannonville Motorsports Park
- Former national 600 Sportbike Champion Clint McBain gets “all reflective” on your motorcycles mirrors
- Yamaha’s Bryan Hudgin “puts it up on the curb” during this weeks “Scooter Sense” installment
- Canadian suspension guru, John Sharrard will sample a race track prepped BMW F800S
Dave and Norm roar out to the Joshua Tree National Park during their ultimate ride in southern California

For more info visit For more info visit www.motorcycleexperience.ca …this season Motorcycle Experience will be giving away a brand new Yamaha BWs125 scooter! Just log onto our program website and click on the Scooter Sense “Less Is More” hot link for all the contest details and learn more about your chance to win a new set of wheels.

During the Valentine day weekend was the famous Numb Bum 24 hour Ice Race sanctioned by the Alberta Endurance Ice Racing Association (AEIRA). The Numb Bum took place in Sandy Beach, Alberta. In total, 42 teams entered the competition that started at noon on Saturday and ended at the same time Sunday. 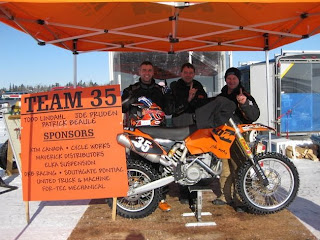 KTM Canada – Cycle Works Team 35 riders, Patrick Beaulé, Todd Lindahl and Joe Pruden were pumped and Ready to Race. The 14 km track was rough during the first couple hours due to the frozen slush cause by the previous week cool temperature but as it got colder the track got perfect.

KTM Canada – Cycle Works Team 35, rode very well, fast and they were extremely consistent during the whole 24 hours. They were able to take the lead by the 8th hour mark and they kept it until the end. They had some great battles with other teams up to the 14th hour. After that time, they started to gain some time on the second team. KTM Canada – Cycle Works Team 35 crossed the finish line in first place with about a 7 lap lead on the second position. The team was really happy and excited about that race and it was worth a couple of frozen fingers.
Comments

The Spring collection has arrived from KTM - just in time for winter if you're on the East coast! It's chilly out! All joking aside, Spring is on the way so if you're looking for some new orange-wear, best check this out.

It's definitely not all loungewear - though there's plenty of that too. There's some technical garments for riding, and protective gear too. The number of items is too big to list - there's a bit of everything in there.

According to the Press Release from KTM here's some of what you can expect to see: 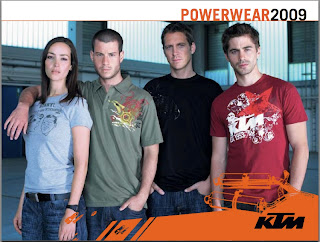 True to the motto “New season, new style”, KTM again supplies the right item for every occasion. Offering everything from a great casual t-shirt with motocross print right up to the really hot new KTM Shoes, the Spring Collection offers a whole range of clothing with extremely high “style” factor.

Style and safety both belong in the Spring Collection

And those who are on the lookout for new offroad equipment will find just the right items in the Spring Collection to ensure they enjoy a safe 2009 season. The renowned Tech 8 Boots are available in a sporty white in this Spring Collection. Exclusively developed for KTM by manufacturers Alpinestars, they offer optimal protection for all areas of the foot, calf and shin. And even though there is a high safety factor, nothing lacks when it comes to comfort. Specially adapted “Flex Zones” at the instep and heel lift the level of comfort and control when taking a wild offroad ride.

The KTM website says to look at www.ktmcanada.com for more details but after digging around on their site for a little bit I managed to track down their "PowerWear - 2009 Catalog" here. It's an 11MB PDF available for download.
Comments