The world’s fastest 350cc motorcycle with sidecar comes from a Fort Saskatchewan shop. Darren Boychuck of E&S Motorcycles set the record at the Bonneyville salt flats last week, pushing his machine to an average of 112.284 mph over two identical runs.


His best run was actually 117 mph, but the second run the next day was far slower because of slushy conditions following lots of rain. Not only was the course wet and slippery, the high humidity changed the effective altitude to about 8,000 ft. 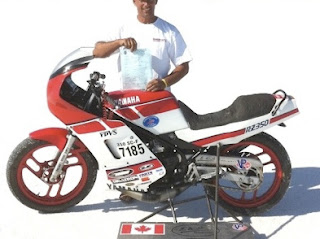 “On a two-stroke that’s a killer,” Boychuck says Darren and brother Bob own and operate E&S Motorcycles in Fort Saskatchewan. The record attempt was backed by the shop and suppliers. Darren is pleased with his machine’s performance and achieving the sidecar record, but is still determined to go back to Bonneyville next year and break the old record for all 350 cc modified open fuel motorcycles.  That record, set in 1988 at 139.694 mph, can be beat and Boychuk’s Yamaha RZ350 is the machine to do it, he says.


He had hoped to do it this year, but simply ran out of time. Just qualifying to attempt the record took two full days, and the sidecar record took another two days, leaving too little time to set the bigger record with just one day left in Speed Week, Boychuk says.