What happens when you take a dedicated team of volunteers, task them with facilitating a one of a kind scooter rally, welcome a motley crew of about 75 willing participants, and send them on some of the best roads in Ontario for a wild and crazy 24 hour adventure on two wheels?

You get the most successful Mad Bastard Scooter Rally EVER - and it's all thanks to every single one of our volunteers, participants, sponsors, supporters and hosts!
Here's what you missed, if you missed it:
The 2015 Mad Bastard Scooter Rally brought riders to Guelph, Ontario as their Headquarters for their weekend of madness. With an almost even mix of new bastards vs. old, the inaugural tailgate style party was the perfect atmosphere for hanging out, scoping out the competition, final costume details, and last minute fixes to scooters. It was a spectacle, to say the least. From American Minions and Ferries, to local Animals, Knights & Maidens, and Crash Test Dummies - anyone walking by the Delta Guelph Hotel & Conference Centre got an eye full, to say the least!
Late Friday night the top secret route for the 2015 rally was revealed to participants. It was challenging, but hey, this is the Mad Bastard Scooter Rally we're talking about! A 639km route heavy in complex navigation, taking riders through both rural and urban landscapes, up and down the escarpment, a trek for even the most experienced of Bastards - and so much fun!

Riders left Guelph in the early and dark hours of Saturday morning making their way through the urban jungle of Hamilton before they encountered the Niagara Region. They continued to follow the lake as they headed toward Ontario's SouthWest, with stops in Port Dover as well as Turkey Point (the farthest point in the rally). The route back home would take them through scenic Caledonia, up through Brantford and back into Guelph, but not before routing them to a roadside clue and mandatory gas stop in the Tri-City area.

Congratulations
Rider #001 - Todd M.
for being the Maddest Bastard of 2015
earning the title for the 2nd rally in a row. 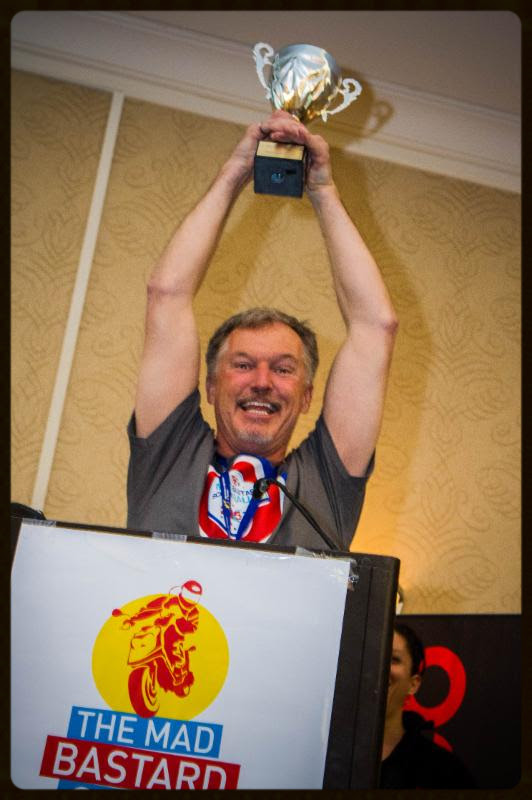 The Atlantic Motorcycle and ATV show opens its doors this Friday (February 10th, 2012) and runs through to Sunday.


Here's the full details on the event:

The Atlantic Motorcycle and ATV Show will roar into Moncton, this Friday thru Sunday. This event will encompass the entire Moncton Coliseum complex and will showcase the latest products for motorcycle, ATV and off-road enthusiasts available on the market today. The nation’s leading manufacturers will be well represented and visitors will not be left disappointed.

The Atlantic Motorcycle and ATV Show is one of 7 successful, national manufacturer supported motorcycle shows from coast to coast. Owned by the Motorcycle & Moped Industry Council (MMIC) this event is the only show of its kind and caliber in Atlantic Canada. Since 2008, the event has delivered over 50,000 qualified buyers who have enjoyed the biggest and best names in motosports.

Show Manager Scott Sprague is revved up about the 2012 edition of this event. “Being a part of this huge chain of manufacturer supported shows is phenomenal. For a visitor to be able to see a booth that is the same display at the MMIC-COHV Shows in Toronto, Vancouver or elsewhere right in Moncton, the hub of the Maritimes, is fantastic and convenient for all of Atlantic Canada and beyond,” said Sprague.

The Atlantic Motorcycle and ATV Show is where Atlantic Canada RIDES and BUYS! Visitors will be shopping the show and trying that new ATV or Motorcycle on for size and discussing the purchase with their local dealer plus getting all of those tough questions answered right from manufacturer representatives. Visitors can take home awesome deals on parts & accessories, clothing and apparel and so much more. The event is also the leading venue to meet the organizers of local rallies, motorcycle and ATV clubs, destinations, anything and everything to do with the lifestyle that comes with this pastime.

Visitors can enter to win His and Hers Riding Gear compliments of Speed and Strength Gear and Toys for Big Boys. Simply fill out a ballot and it could be you!

Triumph Motorcycles have come out in a big way this year with several custom show bikes including the Tom Cruise Mi3 Scrambler, the Orange County Choppers Triumph Retro Bonneville Custom and many more. Also Triumph, in partnership with Atlantic Motoplex will be presenting Juno Award Winner, Clayton Bellamy of the Road Hammers. Clayton will appear on stage performing during ladies night and in the Triumph booth alongside THE WILD ONE.’ Sucker Punch Sally builds us a modern day BRANDO WILD CHILD, this Bird will be ridden in the release video of Clayton’s new album. See them both at the show.

This year’s highlights include the Yamaha Riding Academy for kids that will also feature ALL NEW ATV training for youth. ATV Training available upon request. In addition to that there will be Yamaha Scooter School training, especially appealing to the ladies; this will be held on Friday and Saturday evening.

And speaking of the ladies, join us on Saturday night from 5 pm – 9 pm when it’s free admission for ladies night, when a regular admission is purchased. There will be special prizes and giveaways just for women, plus our fashion show at 7 and Ladies Scooter training at 8.

The Women on Wheels Fashion Show will also be on each day so be sure to check out the terrific line up of manufacturers clothing modeled on stage from Yamaha, Honda, Harley Davidson, KTM, Victory, Ducati, Suzuki, Triumph and BMW.

And join world rider, Rene Cormier, as he talks passionately about his moto-adventures through Africa and beyond. Meeting him is an adventure YOU won’t want to miss. Also, visitors can check out the all new show and shine featuring local motorcycles. Proceeds to benefit the Bernice McNaughton Bike Club.

Join special guests from River Glade Speedway, as they celebrate 35 years and showcase some of the hottest bikes from the 70s right there on display including a slide show of racing at the track from past and present. The bikes that will have on display for comparison purposes are a 1977 Cr-125 Honda, a 1987 CR-125 Honda as well as a 1997 CR-125 Honda. There will also be a 1979 Can-Am MX-5 250. These Honda's will illustrate the many changes the bikes have undergone over the years. Although 125's are no longer made for the most part, as the 250 4-stroke took over that class of racing we will most likely have a four stoke on hand as well to show further enhancements. These bikes will show the progression from air cooled to liquid engines, from drum brakes to disc brakes, steel frames to aluminum frames and from four inches of suspension travel to twelve. Also, horse power more than doubled over the years!