Some cool stuff from the folks from Yamato Co,. Ltd. A functioning 1/6 model of 1972 Kawasaki Z1 that was five years in the making.  Amazing! No word on cost but I want one!

Yamato Co., Ltd., a leader in the design and manufacture of high-end transforming vehicles and detailed figures, is pleased to announce history in the making with the introduction of its latest groundbreaking achievement:   1/6 Museum Model, Vol. 1:  Kawasaki Z1 – 1972 Early Type (Candy Brown), the most accurate and customizable motorcycle model to date.
Motorcycle models are nothing new, but motorcycle models of the past have lacked precision, omitted details, and ultimately remained a fixed display.  However, through the use of the latest technologies and materials, as well as our own unique expertise, we at Yamato have successfully replicated a motorcycle in scale form which is so true, precise, and versatile that, in our opinion, it is genuinely worthy of a display in a museum.  Truly, this is the birth of an unprecedented motorcycle model which is far beyond the “toy” category!
So how did we achieve such a feat?
A Lengthy and Exhaustive Search around the World 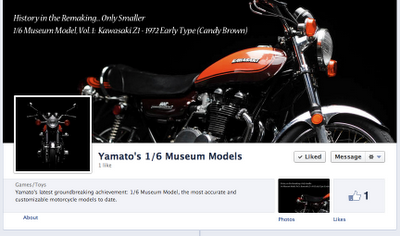 In making our Z1 1/6 Museum Model, we set out to include every last detail down to the engraved logos of individual parts.  With the passage of forty years, though, the availability of an actual Z1 upon which to base our model is obviously quite limited.  It is even harder to find a Z1 with all its original parts, as over time parts have been refurbished, modified, or added.

In order to perfectly replicate the Z1, we had to painstakingly search out and obtain genuine, original parts from motorcycle shops and passionate collectors around the world.  Then, utilizing the latest in 3D laser scanning technology, we took each part, scanned them one by one, and transferred the data into CAD to create precise prototypes for flawless molds.  But that’s not all.
Precision Engineering, Then and Now


What’s even more amazing is that there are many small parts used on the actual Z1 that are too small to replicate in 1/6 scale.  Some parts are less than 1.0mm in thickness!  That’s way too small to duplicate utilizing conventional injection molding.


We began our 1/6 Museum Model project with this challenge in mind, and the goal to flawlessly replicate the Z1 by finding ways to overcome such technical obstacles.  In the end, to achieve our goal we employed an elaborate process of separating, gluing and painting small parts or replicating them using special synthetic materials more suitable for such extreme sizes than die-cast or plastic.  And our efforts paid off.


After more than five years, 1,600+ piece construction, and just as many paint applications, we have fashioned a fan’s dream - a model based on the most valuable and rarest of Z1s, “The Early Type (Frame Number 44)”, as our sensational first release:  1/6 Museum Model, Vol.1:  Kawasaki Z1 1972 Early Type (Candy Brown).  But this is no ordinary replica.


Yamato’s Z1 1/6 Museum Model is not a mere display piece.  It is the ultimate scale model accurately replicating the style and beauty of the original Z1 motorcycle in every detail… including function!  Even the smallest of parts such as nuts and bolts are accurate in their function.  What does this mean?


It also means you have the further freedom to customize your Z1 to create your own unique, one-of-a-kind motorcycle with extra parts such as handle bars, footboards, seats, tires and more all of which are now under development in joint effort with Yoshimura and other famous custom parts manufacturers.
•••
Forty years ago, Kawasaki Heavy Industries made history with the debut of its Z1.  This year, Yamato stands to make history again with its 1/6 Museum Model, Vol. 1:  Kawasaki Z1 – 1972 Early Type (Candy Brown).  Don’t miss your chance to own a part of history this fall, contact your local hobby, pop culture, or motorcycle shop for more details.  Or visit us through our North American subsidiary a twww.YamatoToysUSA.com.
And like Yamato’s 1/6 Museum Model on Facebook
https://www.facebook.com/KawasakiZ1Model