Aprilia Mana X concept gets captured in the studio

Aprilia's Mana X was unveiled a little while back at the EICMA motorcycle show in Milan, Italy. The photo's that came out of the show didn't really do it justice though and Aprilia have finally released some new photo's with a higher level of detail that help you see all the interesting elements of the bike. 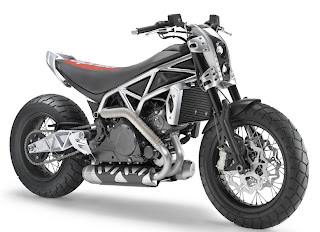 The Mana X is Aprilia's take on a stylish, fun, urban bike. It's based on the Mana 850 and seems to use most of the 850's frame, engine, and the CVT transmission. It adds some flat track-inspired styling which is so "Harley XR-1200" right now.

The styling is bold and sits much lower than the standard Mana. The seat is extended and covers most of the airbox (the fuel is under the seat), it gets large 17" wheels fitted with dirt-style tires and heat wrapped exhaust. The projector style headlights are reminiscent of high end camera lenses. 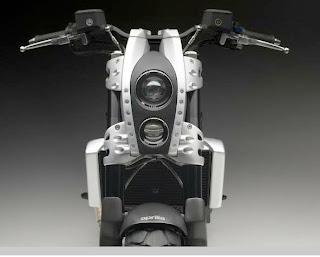 Don't look for gear and brake levers down at the footpegs either; you won't find them there. The Mana X uses a CVT transmission and so the shifting is performed automatically via buttons mounted on the handlebars. So, the rear brake to be moved up to the left handlebar position. This should appeal to riders transitioning from scooters to motorcycle.

Sales have been reportedly slow for the Mana 850 and Aprilia could be looking to breath new life into interest for the Mana engine and CVT technology. This is a concept bike but it wouldn't be too much of a stretch to move it into production. Some changes would obviously have to be made, such as extending the seat and rear fender.
Comments