On what was to be the last official Parts Canada Superbike Championship held at the Race City Motorsport Park, an enthusiastic audience was granted endless rays of sun. As if to remind the crowd of the will of the weather gods, the Buell® bikes of the Deeley Racing/Ruthless Racing Inc. team emanated a constant growl and grumble throughout the weekend. 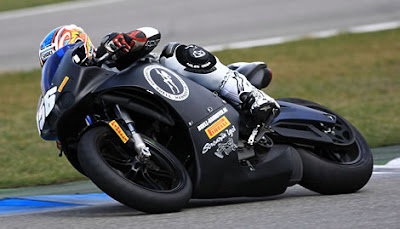 The Deeley Racing/Ruthless Racing Inc. team had four top-ten finishes within two national events, consequently validating Buell® 1125RTM bikes as high-performance sport bikes. The qualifying rounds of the Yoshimura Pro Sport Bike on Saturday came to an abrupt end when a red flag appeared just 2.5 minutes before the planned end of the race due to Rupert Collins’ Ducati clipping Darren James’ 1125RTM motorcycle and crashing into the wall. James’ expert reflexes allowed him to counteract and maintain control of his bike in order to bring it to an 11th place finish. Dave Estok, although still mildly concussed from his crash in Mirabel, finished in a solid eighth spot, while veteran Steve Crevier displayed brilliant tactics and qualified in fourth, just a split-second behind the top three racers.

With a grid of 25 contending riders in the Yoshimura Pro Sport Bike final race on Sunday, the spectators witnessed some electrifying moments and some very close action.

Dave bravely defended his qualifying position until the very end, commenting afterwards, “I am happy with the results today. I know I can do better, but it is comforting that I was running only seconds off the guys ahead. One of my main goals was to keep the BMWs at bay, which I managed to do. They were struggling with the front end and the Buell® 1125RTM [bike] just ate them up on the straightaways.

A beaming Darren James hopped off the bike after finishing in tenth position and with unconcealed pleasure confided, “I am obviously ecstatic about placing in [the] top ten, and I owe everything to Dave, Rod, and Thomas Morin, who gave it their all to have the bike prepped so well for me. I am also grateful for not having wrecked a bike this weekend for a change!”

Steve Crevier relentlessly weaved his way through the race, looking to take advantage of opportunities with his Buell® 1125RTM bike and finally settled for fifth place, the highest position of the three 1125RTM bikes on the track, just a split-second away from the riders in the lead. In a rare moment of seriousness, he conceded that, “Three races into the season, I am quite excited about the performance of the bikes. I am having quite a lot of fun because my bike favours larger tracks such as this one.”

The Superbike event delivered the promised entertainment to all racing fans. With a seventh position, Crevier secured a second row start in the Pirelli Superpole, and commented, “I’m a little disappointed and could have done better. I dragged the fairing and slid the bike in the second-to-last turn, so my drive onto the front straightaway was affected. But still, I managed to shave three-quarters of a second off my personal best Superpole time.”

Finally, in a showdown that visibly engaged the crowd, there was some serious dicing action between lead contenders Jordan Szoke, on a Kawasaki, and Brett McCormick on his Suzuki. Meanwhile, a judicious Crevier carved his path on the track, using corners three and four to attempt passes. Highlights included Crevier block-passing Kawasaki rider Alex Welsh, and making an aggressive pass on Mike Zottmann, decisively cutting off the Suzuki rider on the carousel.

As eager spectators cheered on Brett McCormick in his final pass as he stole supremacy from Szoke, Crevier narrowly missed out on the fifth position he was aiming for, and concluded his race with a sixth-place finish behind Suzuki rider Clint McBain.

In attendance of Don James, Chairman & CEO of Deeley Harley-Davidson® Canada, an impish smile crossed Crevier’s face as he tried his luck in stating, “I know, I know… I could have done better! I was under too much pressure knowing that the big boss was here. But I promise, I will do my homework and put the 1125RTM [bike] onto the podium before the end of the season. It’s a great bike and [it] deserves to be there. I will be humbled to be the one to ride it there.”

And Crevier being Crevier, we cannot but take his word for it.

The Deeley Racing/Ruthless Racing Inc. team – powered by Buell will be racing in the double-header of the Parts Canada Superbike Championship at the Mosport International Speedway in Bowmannville, Ontario. For information on how to get there, please refer to www.partscanada.com.
Comments