Duncan BC's own Don Hatton will be arriving at Victoria airport 11:45 Thursday January 21 from his adventure in the 210 Dakar Rally in Argentina. He welcomes media and fans to greet him there if available. 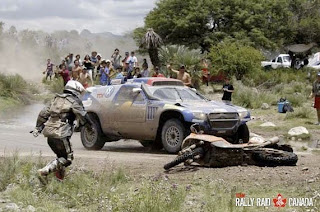 Don's KTM race bike is being shipped back to England via France to be prepared for the balance of the Rally Raid race season. Although Don was unable to complete the grueling Dakar race this year he is excited to compete in more FIA World Cup events with the next one scheduled in Abu Dhabi.
Don and the Rally Raid Canada Team will also be at the 2010 Vancouver Motorcycle Show Saturday January 23 and Sunday January 24 at the Tradex – Trade and Exhibition Center in Abbotsford. Look for them at the “Kimpex” booth.
For more information and photos check out Destination Dakar
Comments