Honda has announced that they'll be building a production model that's based on the V4 concept. It'll hit the showroom floor in "the first half of 2010." 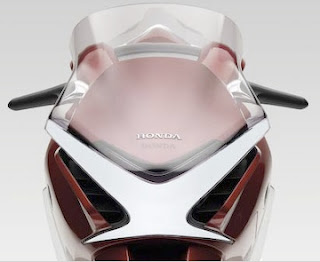 The concept is a bit wild - with hubless wheels and a strange looking headlight that looks like a big X. It's not likely that we'll get hubless wheels but many have been looking for a more powerful and lighter successor to the VFR 800. This bike is supposedly biased towards rider comfort and on-road ability rather than racetrack success.

Maybe this is what those folks have been waiting for.

Here's what Honda had to say:

"The exciting news of the V4 production model is the result of overwhelming response from customers, media and motorcycle dealers across Europe following the debut of the V4 Concept Model at last month's Intermot show, where the world's largest motorcycle manufacturer chose 'New Beginnings' as its theme to celebrate Honda's 60th anniversary as a company, 50th anniversary of racing and 30th anniversary of the Honda's iconic V4 engine configuration. 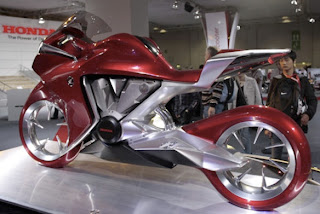 "Building on this theme at this week's Milan Show, Honda highlighted the next stage of the V4 story and looked forward to the next 60 years of motorcycle production, with V4 technology forming a part of the marque's future direction in the coming few years, starting in just 18 months time with the introduction of the first V4 mass-production model in the first half of 2010."
Comments