Deeley Racing/Ruthless Racing Inc. powered by Buell Heads to the Fight in the Foothills

TORONTO, Ontario (June 24, 2009) – The team riders are ready for this coming weekend’s Parts Canada Superbike races at Race City in Calgary, Alberta, round three of the National Road Race Championships. After two rounds, the Deeley racers are well placed for a run at two separate championships.

In the premiere Parts Canada Superbike class, Steve Crevier currently sits in fifth place after his fifth place finish at round one in Calabogie, Ontario, and after his inspiring ride to fourth place at the round two race in Montréal. Last year in Calgary, Steve was forced to retire from the race early after a minor mechanical glitch. 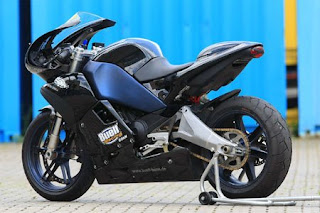 “Yeah, that was unfortunate,” he commented. “But that’s racing and that was last year. This year, I’m pretty confident things are going to be different. We’ve been working through some issues, I’m trying to do my part on track, and the crew, Pete Snell, and the rest, have been outstanding. We’ll just put our heads down and do our absolute best. You can’t ask for more than that.”

All three Buell® 1125RTM bike riders will compete in the Yoshimura Sportbike class and are placed as follows after two events. Steve Crevier holds sixth position, Darren James is in 11th, and Dave Estok is holding 13th. Had it not been for an unfortunate crash at the Mirabel race, Dave would be much higher in the standings.

“I’m still disappointed in myself for crashing at Mirabel,” the Florida-based rider explained. “I’ve got kind of a reputation for not crashing, and we were doing pretty good when I went down. But, that’s behind me now. As for Calgary, to be honest, Race City is not my favourite track and yet, ironically, I’ve done well there. Last year I put the Buell® [bike] on the podium, and I’d like to do that or better this weekend. The long straight at Calgary should work to our advantage; it will really show the Buell® 1125TM [bike’s] power. Each race I’m getting closer to Steve, and one of my goals for this year is to have a good heads up race with him. He’s absolutely one of the best, so if I can run with him, I’ll be happy.”

Placing right behind Estok last year in fourth place at Calgary was team boss Darren James. James rode most of the season with aggravating injuries, and Calgary was no different. “I am really looking forward to Calgary,” he commented. “This is the only Parts Canada race we have out west, and it’s very important to us. Our crew has been working extremely hard to get us this far, and we are improving with each outing, so we intend to continue that climb. We have a strong fan following in Calgary, and the Deeley team has no intention [of] letting them down.”

Practise starts Friday for round three of the 2009 series, with qualifying and Pirelli Superpole on Saturday, and a full card of National Championship races on Sunday.

For further information on the track, please refer to www.cdnsuperbike.com.
Comments