Claudio Castiglioni—president of MV Agusta died Wednesday (Aug 17th) at a clinic in Varese after a long battle with cancer.

It's a huge blow to the motorcycle community as he was a talented designer and entrepreneur. Over the years he's owned or been part owner in a series of high profile brands - MV Agusta, Ducati, Moto Morini, and Husqvarna

According to an MV Agusta Press Release: 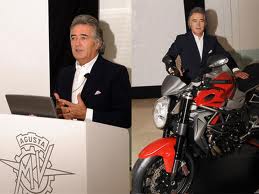 Claudio Castiglioni has given us some of the most important motorcycles ever built, personifying performance,elegance and style: Cagiva Elefant and Mito, Ducati 916 and Monster as well as the MV Agusta F4 and Brutale.Finally, the President crafted the latest jewels in every detail, a testament to his insatiable passion formotorcycles: the MV Agusta F3 and Brutale 675.

For the past year, the President has left the guidance of MV Agusta to his son Giovanni, who has been by hisside during many of the battles that have formed the story of the manufacture in Varese. These challenges, dayafter day, constructed and invisible fabric that was so well woven by this truly unique person and businessman.Giovanni, with the same passion and tenacity as his father, from this day forth will continue to create what Claudio Castiglioni described as “the most beautiful motorcycles in the world

The funeral will take place Friday August 19th at 14:00 in the Church of the Brunella in via Crispi, Varese(Italy)