The countdown has begun for Ontario’s biggest motorcycle manufacturers’ showcase of the year, as the Toronto Motorcycle Show returns to the Metro Toronto Convention Centre (South),  December 7-9.

In less than two months, hundreds of new 2013 motorcycles, scooters and ATVs from the world’s top manufacturers will be on display, including several Canadian debuts.

In addition to the new bikes, motorcycle enthusiasts can check-out a wide-range of exciting exhibits and features, plus the latest in apparel, accessories and touring destinations – all under one roof, in a space equivalent to three football fields. 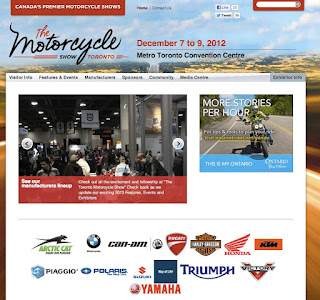 The theme of this year’s Show is “Riding Redefined” and it speaks to the on-going evolution of motorcycles and motorcycling, through innovative technologies and designs in the new bikes, riding gear and parts that will be on display during the three-day event.

“The Toronto Motorcycle Show is one of the most anticipated weekends on the bike community’s calendar, and it’s a great opportunity for enthusiasts to experience how the motorcycle industry is redefining riding,” said Show Manager, Neil Fardy. “This year’s edition promises to have something for everyone who’s passionate about the sport. We’ll have a number of features that are exclusive to the Show, including SHE RIDES NIGHT and the Yamaha Riding Academy for kids.”

The Show’s opening night (Friday, December 7) is SHE RIDES NIGHT, a celebration of women who ride or are considering taking up the sport. Admission for all women is half-price after 5pm, with a full evening of entertaining presentations, demonstrations, and other activities that will appeal to women riders. The night also includes deals and treats galore, courtesy of show exhibitors and sponsors.

The Yamaha Riding Academy makes its only Ontario motorcycle show appearance of the season with a free opportunity for kids, aged 6-12, to take a ride on an off-road motorcycle while at the Toronto Show (certain conditions apply). With certified instruction, the latest motocross gear and a 15-minute riding session, children will be safely introduced to the world of off-road riding.

“In the coming weeks, we’ll announce more features and specials that will add value and excitement for those attending this year’s Show,” continued Fardy. “Of course the stars of the Show are the bikes themselves. If fans want to see the official corporate exhibits and the newest models from the best brands in the business, then they’ll want to make plans to join us at the Metro Toronto Convention Centre in December.”

People can also become part of the Toronto Motorcycle Show’s online community by liking the Facebook Page (www.facebook.com/TorontoMotorcycleShow) and following on Twitter (www.twitter.com/thebikeshows ).