Young Wraps Up Rookie Season On A High Note At NOLA

AMA Pro GoPro Daytona SportBike racer Ben Young wrapped up his rookie season this past weekend at the final round of the GEICO Motorcycle AMA Pro Road Racing series at NOLA Motorsports Park in New Orleans, LA with a class-best finish of 12th place on Saturday and a 17th on Sunday. 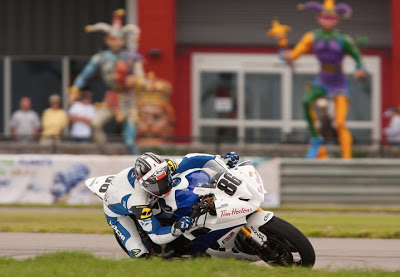 “The gearing helped a bunch. We ran the same Dunlop tires from this morning for the first half of the session then we changed the rear and put a new medium on it.”  said Young. “I did my fastest lap on the last lap with 5 laps on the new rear and about at least 35 laps on the front which started to slide on the closing laps.”

In Saturdays AMA Pro GoPro Daytona SportBike race Young got a great start and began his charge towards the top fifteen.  The race was only into the third lap when it was red flagged due to a dramatic two-rider crash in Turn 6.  Luckily both riders were uninjured; however the red flag forced riders to the pits for about 15 minutes before the competitors could restart.

Young got another impressive start and battled right to the end crossing the line in 12th – which was a season-best finish for the young pilot from Thornbury Ontario. With the success of the first race Young was determined to improve on his result in the final race of the season on Sunday.

Again from 22nd on the grid, Young got another great start and quickly gained positions moving into 13th place in the final AMA Pro GoPro Daytona SportBike race of the season.  Battling for 12th for most of the race he was followed closely by a group of five riders hunting him down for his position.  After dicing back and forth within the tightly packed group of riders Young slipped back to eventually cross the line in a very creditable 15th position.  Young then learned that he was to be penalized 5 seconds for crossing the white boundary line on the exit of the final turn. This setback would see him finish the day officially in 17th place.

Young was asked about his weekend; Ben explained, “I am so pleased with our results this weekend. We’ve worked so hard throughout the entire season and to almost break into the top ten is a nice way to end the season.  I was devastated in the second race by being penalized for crossing the white line on the final turn.  It was the first time I crossed the line over the whole weekend and it was because I was riding so hard to keep ahead of the guys behind me, I went in slightly too hard and had to run wide.  If I closed the throttle to keep inside the line the riders behind would have ran into me, I had no choice.  I hope they get it sorted out for next season.”

With a successful rookie season now under his belt Young is already talking with marketing partners and exploring opportunities within the AMA paddock to contend the 2013 AMA Pro GoPro Daytona SportBike Championship.

Father and BYR team manager Scott Young was asked about their future plans:  “Ben has developed very well this season and he’s achieved the goals that were setout at the beginning of the season.  In 2011 we decided that this season Ben would enter the Daytona SportBike class to develop his talents and learn all the AMA circuits that the series visits.  It was unfortunate that we had to miss 3 rounds this season due to commitments that were out of our control.”

“For the 2013 season we are currently scouting opportunities to align Ben with an existing and proven team within the AMA paddock. Having a full team around him including full-time technical/mechanical support and teammates will allow him to learn and challenge himself to continue the impressive growth he has shown this season.” added Scott Young.“We’ve had a great season! We’re looking forward to being a part of the AMA Pro Road Racing paddock in 2013. Thank you to the AMA staff, organizers, the tracks and corner workers for providing a safe and exciting series. To compete at this level takes support from so many wonderful people and outstanding organizations. I must also thank the many encouraging family members, fans and sponsors that make all this happen!” added the young racer.