Women riders around the world prepare to ride their motorcycles for unified global action on Friday 6 May!

Just one-month away on Friday 6 May, women riders around the world will get on their motorcycles in unison to celebrate the fifth globally-synchronized International Female Ride Day! In 2011, this unique motorcycling event unifying women motorcyclists around the planet spans its reach yet further as more countries and women riders join the action! 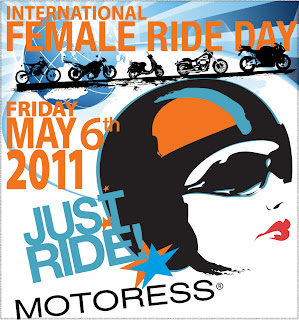 International Female Ride Day whose simple theme asks women to “JUST RIDE”, is a designated day, aimed at bringing awareness to the existing and mounting numbers of women motorcyclists, a prominent escalating segment of the motorcycling community who ride just as much as their male counterparts. “We ride on a Friday to emphasize the fact that motorcycling for women is not only a hobby but something women incorporate into their every day lives. Women ride to work, to school or to run errands, such as I do on my scooter in the city- it’s a reality in a woman’s life, and this day simply accentuates it. Women enthusiastically prepare to ride and unite around the world on this synchronized day - and if you look at the feedback by way of internet, it’s truly phenomenal!” says Vicki Gray, founder of the International Female Ride Day and of MOTORESS. “For the 5th year we’re so excited to welcome support and participation from National Russian Motorcycle Federation (NRMF) and equally a group of women in India who are totally on board with the action! This year many women have referred to the campaign as a ‘movement’ and really, its global size is certainly proof of that!”

Since its introduction in 2007, International Female Ride Day has continued to expand demonstrating magnificent growth. This has also been a result of the endorsement and support from the motorcycle industry and its prominent leaders, renowned female rider clubs, and international governing bodies such as Federation Internationale de Motocyclisme (FIM). In 2011 women riders throughout Canada, United States, Australia, England, The Netherlands, Greece, Italy, Poland, Israel, Hungary, Slovakia, India, Russia Germany and more- will contribute to the campaign in compelling numbers.