Ural has some great sales numbers in October

In global terms the 2WD models continue to be a major portion of sales but the T-series bikes (Ural T and Patrol T) are becoming the second largest segment.  Canadians still seem to like the 2WD models best.

An interesting bit of Ural demographics is that they've seen a two-fold increase in the number of younger customers this year. With every sixth customer now being 35 or younger, Ural is proving that quite a few new generation riders these days are choosing simplicity, functionality and fun over ever-growing hp's and cc's.

- Aluminum rims on all models (that means that not only Patrols and Tourists but all other models including Retro and sT will have perfectly round rims made from high-grade aluminum alloy)
- Standard (factory installed) Duro tires
- Trunk locks on all (sidecar) models (no, we didn't forget to fix sidecars seat back)
- New tonneau covers and aprons made from Cordura fabric
- New round indicator lamps
- Quite a few other smaller changes (such as upper fork bolts made from aluminum , improved high strength final drive ring gear bolts and more)


2011 Patrols now come in additional standard colors (which you've already seen on our site HERE)  - orange with silver stripes (Ural calls it Orange Russian) and blue with white stripes (Baikal Blue is the nickname for this one): 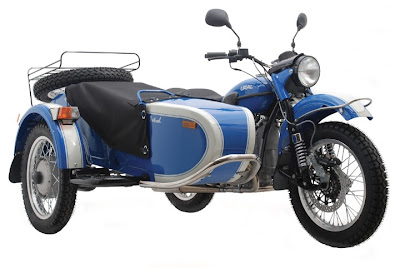 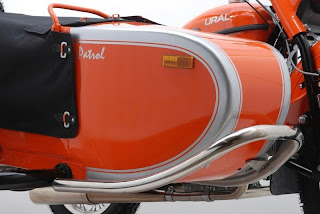 Interested in more Ural news? Check out all out Ural news HERE.
Comments