How far would you think you could reasonably go riding 2-up on a 49cc scooter (2-up is just another way of saying 2 people on the same scooter)?  A few hundred kilometers maybe? 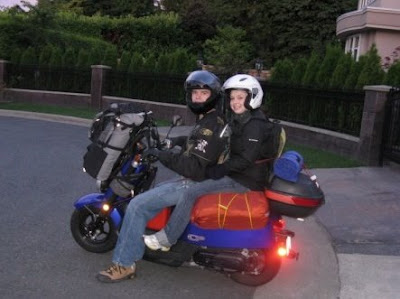 Well - a young Canadian couple recently went on a ride that might just destroy your image of what's possible on a 49cc scooter.  On September 2, 2008 they set out from Vancover, BC and started heading east.  Where did they stop?
Eleven days after their journey began they stopped in Barrie, Ontario.  That's about 4,500 kilometers just in case you're wondering.
Their vehicle of choice was a 49cc 2007 Yamaha C3 scooter! I think that might possibly be some kind of a record.
The top speed of a scooter isn't terribly fast, particularly on hills, and with two riders on board. Be sure to read the daily logs.  There's some pretty humurous stuff in there.
Some key facts about the trip:
Money spent on Gas = $153.76
Liters of Gas bought = 115.68
Kilometers traveled = 4486kms
Average gas consumption = 109 MPG or 2.58litres/100kms
See all the crazy adventures unfold on their website. They've made some posts about each day of the adventure and posted some pictures and video.
Check it out!
Comments