Ducati North America - Brining some of Italy to a Canadian town near you!

The big Ducati truck filled with the latest 2009 season motorcycles from Italy is going to be making it's way across Canada. It'll be making fourteen stops along the way so that you can demo their machines.

The tour also supports a charity too so you pay a small fee to ride and the money goes to charity. I believe it was $20 a ride last year and the ride lasted about an hour.

Toronto, ON (15 April 2009) - Ducati North America is pleased to announce the 2009 Ducati Canada National Demo Tour, an opportunity to sample the 2009 model lineup while supporting the Canadian Cystic Fibrosis Foundation.

The annual event begins April 25th in Vancouver, BC and has stops at authorized Ducati dealers across Canada, concluding June 19th in Dieppe, NB. The demo tour offers a unique opportunity to sample Ducati’s most popular models in a fun riding environment, and meet with both Ducati and dealer staff to learn more about the Italian manufacturer’s handmade motorcycles. 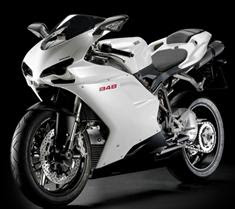 For 2009 the Ducati demo tour will be teaming up with Canadian Cystic Fibrosis Foundation; requesting a voluntary $10.00 donation collected from participating riders. Last year Ducati demo riders contributed over $4000 to the foundation, and had a great time doing it. Ducati North America hopes to raise even more in 2009 to help this worthy charity.

For more information about the 2009 Canadian demo tour, as well as details regarding safety requirements and the models available, please visit www.ducatiusa.com.

The Ducati lineup on tour will include:

*Model available to pre-qualified riders only