Austrian motorcycle company KTM plans to produce an electric off-road motorcycle within the next two years. KTM already makes some of the most successful off-road bikes on the market - one needs only look to the Dakar Rally for evidence of their ability to deliver competent machines. 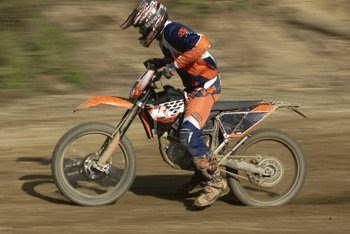 KTM says it already has a prototype that weighs 200 pounds, develops approximately 35 hp, and can run for 40 minutes at race pace before recharging. It offers very quiet operation reportedly and will use a lithium ion battery and the engine group and battery will weigh only 17kg. Considering you won't have a traditional engine and all the parts that go with it (like gasoline which is very heavy) this bike should be a lightweight.

KTM says the most important aspects of the project are that the machine have high power output, low weight and as long a range as possible using today’s technology. Now, after extensive testing, the project has moved from concept to series development.

Restrictive rules on noise and pollution emissions make all-terrain activity illegal in many parts of Europe, including KTM’s home country of Austria. By producing a no-emissions two-wheeler it would allow the company to sell bikes to a larger group of riders.

“As an innovative and market leading company, KTM must continuously look into new ways with which to power our sport motorcycles,” says KTM director Harald Plöckinger. “The zero-emissions concept mates our known competencies with a new highly interesting motor technology. We see emissions-free vehicles as offering the greatest chance to expand enduro sport to a wider and new audience in the mid- and long-term, and to perhaps even start a brand-new trend sport.”

“Use of the latest in battery technology, a highly efficient electric motor, and the best components available integrated into the drive system make up the cornerstones for realization of this motorcycle concept,” says Franz Pirker of Arsenal Research. “Use of a virtual simulator to design and test the concept made it possible to work out all of the bugs without first building the components into a test mule. This so-called ‘hardware-in-the-loop-simulation’ makes it possible to develop such a vehicle quickly and in the most cost-effective way possible.”

How much? Well no, word yet of course but it's been suggested that the price will be slighter higher than a current KTM enduro.
Comments