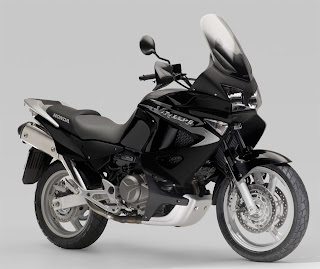 Looks like Honda is jumping on the recent popularity of the adventure style touring machines and have decided to bring the Varadero to Canada. It has been available in Europe for a number of years and is quite popular there. It's a BIG adventure tourer styled bike with a 1000 cc engine, well a fuel injected 996 cc V-Twin to be more exact. Its dry claimed weight is about 220 kg and has a seat height of 845 mm making it for tall and/or experienced riders.

Some other interesting facts - it's got a 25 liter fuel tank which should give it a respectable touring range; comes with ABS, and has a two position windscreen. Haven’t seen any pricing information yet but it should come in close to the Suzuki V-Strom 1000.

For a more in-depth review of the Honda Varadero read this article from our "Featured Articles" on the main page or do a search for "Varadero" in the Google site search box.
Comments

Canada's new model motorcycle show is coming! For those in Toronto it has already come and gone but for those in other select cities across Canada you've still got time. All the major manufacturers launched their new models at the show in Toronto (Dec 7-9th 2007). More than 36,000 people attended the show at the Metro Toronto Convention Center. Don't miss it when it comes to your city. Here's a list of the cities and dates along with the official link: